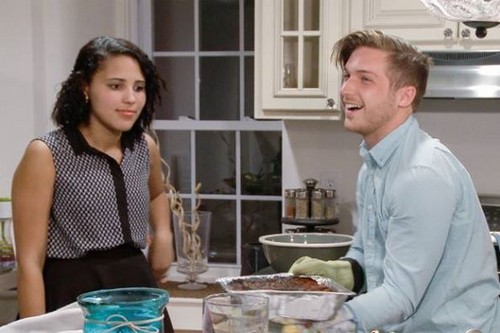 Tonight on TLC 90 Day Fiancé continues with an all new Sunday November 9, season 2 episode 4 called, “Touchdown!.” On tonight’s episode Jason goes to Brazil, but is uncertain if Cassia will meet him; Mohamed learns a new meaning for a familiar phrase; Danny’s family get on Amy’s nerves; Yamir arrives in the U.S. and is welcomed by questions from Chelsea’s parents about their future.

On the last episode, Danny missed Amy’s first day in America. Justin shocked relatives with news of his engagement. Mohamed met the rest of Danielle’s family. Daya met Brett’s daughter for the first time. And we met a new couple Jason and Cassia. Did you watch the last episode? If you missed it, we have a full and detailed recap right here for you.

On tonight’s episode as per the TLC synopsis, “Amy confronts Danny about his overbearing family. Mohamed learns the meaning of “hooking up”. Jason travels to Brazil, still uncertain if Cassia will meet him. Yamir arrives in the U.S. and Chelsea’s parents have many questions about the couple’s future.”

Danielle goes out with her friends to get dresses for her wedding. She finds the perfect dress, which is $726, too expensive for her $500 budget.

Amy is excited to get to spend alone time with Danny as they plan their wedding. However, when she asks him in the car if they’re going to be alone, she finds out three other people are coming. They go to look at the venue, a farm owned by one of Danny’s friends.

His friend jokes that they should consummate the wedding right there in the barn.  Amy tells Danny that though she likes spending time with his family, they should spend more time alone.

Jason doesn’t know if Cassia is going to show up to meet him at the airport in Rio after she said she wouldn’t, but she does end up coming. She was upset because he wasn’t giving her enough of his time, but she decided it would be a waste of everything they’ve been through not to show up at this point.

Brett takes his mom outside to chat a few days after they picked up Daya at the airport. His mom doesn’t think Daya is as enthusiastic about the relationship as he is after Daya questioned if her engagement ring was real in the car. Jason decided to get her a new diamond so that it isn’t a wedge between them. His mother does not approve of this decision, wondering what else Daya won’t be happy about besides the ring.

Chelsea is bringing Nicaraguan pop star Yamir to the United States. Yamir doesn’t speak much English. They are going to be living in Chelsea’s parents’ house.

Danielle’s fiance Mohamed has arrived from Tunisia, and Danielle is worried about the fact that he doesn’t know anyone where they live. Mohamed decides to start walking outside to meet new friends. On a walk, he meets some guys playing football who invite him to join them.

Jason is hoping Cassia gets along with his family. They go down to the house to celebrate, and his dad dresses up as a clown because he heard she didn’t like clowns. Jason takes Cassia to their bedroom and she asks him, “How can we sleep in there?”

He responds “this is called a work in progress,” and she tells him to clean it today.  When they show her the pool, she doesn’t like how dirty that is either. Inside, she asks them about the floor, which goes from tile to wood.

Danny and Amy get ready to go to church and he takes a shower in her house, which reminds her of their vow of abstinence. The couple has to go to counseling with the pastor and pastor’s wife at Danny’s church in order to get married there. At the session, Amy talks about how Danny works, leaving her alone in the house. The couple says they have no time to spend together. Amy brings up how Danny needs to make sacrifices to make the relationship work. Danny feels that these expectations are a huge weight on him that he can’t carry. The pastor’s wife tells him he’s going to have to devote some of the attention he would give to other people in his life to Amy.

Yamir’s hometown in Nicaragua is a big city and he is moving in with Chelsea’s family in a small Illinois town. Now that he has arrived, Chelsea’s parents want to know how they plan to support themselves. “We have a meat packing plant that hires a lot of Latinos,” Chelsea’s mom suggests to him. Chelsea’s father asks if he wants to pursue a music career in the United States, and Yamir says time will give him ideas of what to do.

Brett is taking Daya to a jeweler to get the diamond in her engagement ring checked. Daya says she also wants to prove his reputation by getting it checked. Brett is concerned even though he knows the ring is real, wondering if Daya would just go back to the Philippines if she found out the ring were fake. The ring is confirmed to be real, but Daya wants the black spot out.

Chelsea takes Yamir to open mic night at a local club with the hope that he will perform. She tells him what open mic is, and he watches people performing. He’s scared because the music in the US is much different from the music in Nicaragua. He says he knows Chelsea wants him to go up on stage and perform, but he can’t right now and he doesn’t think people here would like his music.

Afterward, they go get pizza and Chelsea asks if he liked the music at the open mic night. He says it was different and she sees his trepidation and tells him he needs to get together with people who have the same interests as him.

Mohamed gets drinks with the random guys he met and played football with. He tells them about his fiance and they teach him about the concept of “hooking up” in a trite and misogynistic fashion. Then, a couple random women show up and start talking to the group and he tells them about his fiance as well. One of the women starts macking on him, wanting to play doubles in pool and be his partner. This is the first time he has been hit on by a woman, he says, as women in Nicaragua never approach men.