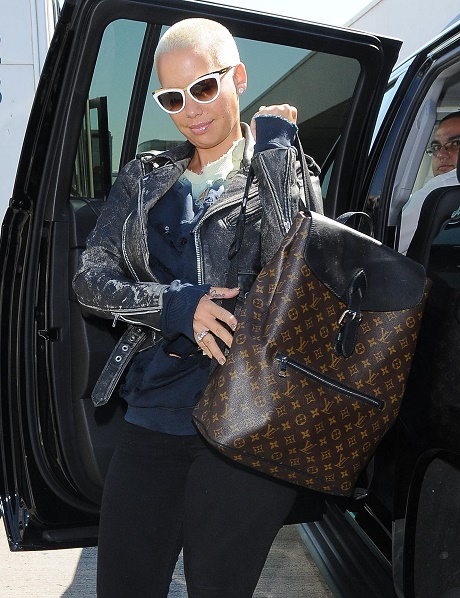 Now that Amber Rose is divorcing Wiz Khalifa, does this mean she could reunite with Kanye West and break up his marriage with Kim Kardashian? Well, Kim Kardashian herself is reportedly worried that this is a possibility. Sources say Kim is so jealous and insecure that she has threatened Kanye from seeing other women.

Amber and Kanye dated from 2008-2010. The two were always together and seemed to have a good relationship. In fact, it was this high-profile relationship that catapulted Amber’s modeling career and socialite status. She is now single and rumors are already swirling that she is dating, Nick Cannon, Gene Simmons’ son, Nick Simmons, or even trying to get back with Kanye.

However, Amber is not the only woman Kim is worried about. The source also reveals she is scared Kanye will cheat on her with Cara Delevingne or Rita Ora.

“Kim has told Kanye that she trusts him, but doesn’t trust the other women,” the source told Star.
Gossip Cop is reporting that this story is completely false. There is no proof that Kim has “threatened” Kanye or that she fears her husband will cheat on her.

He may not cheat on her with Amber, Rita, or Cara, but does anyone really believe this marriage is going to last more than a few years? I’m surprised they’ve made it this far. There is only so much of the Kardashian chaos Kanye can handle before he checks out. He doesn’t spend much time with Kim or the Kardashian family and he most certainly doesn’t want anything to do with the reality shows.

Do you think Kim should worry about Kanye cheating with Amber or anyone else? Tell us what you think and leave a comment below.