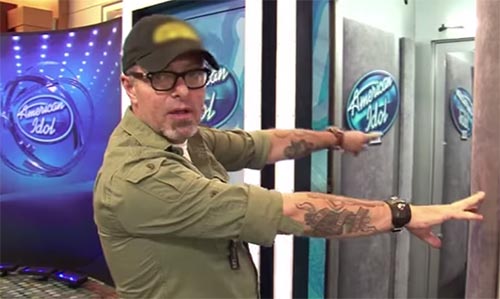 American Idol season 14 will be returning in 2015 — and already we’re gearing up for the show’s anticipated return with new promo videos and behind-the-scenes sneak peeks into how the popular competition is produced. In a recent promo, Senior Supervising Producer Patrick Lynn takes fans of the show on an enlightening tour in Nashville, which he says is an unbelievable hotbed of talent.

During the clip, we see everything from “the chamber” where contestants wait before entering the judging room to the station where Ryan Seacrest watches the talent inside the studio. It truly is amazing how much goes into the show behind the scenes, and people often forget about the countless people who work on the production crew. Without them, well, there simply wouldn’t be a show.

If you think you have what it takes to compete on this next season of the show, then there’s still time for you to find your super stardom! The next LIVE audition will be in San Francisco on September 29th — so get in that car or buy a plane ticket and go get discovered! Details are below:

WHO: Men and women 15-28 years old as of June 1, 2014, who are eligible to work in the U.S. Some restrictions apply – please read the Live Audition Info for specific information.

WHEN: Monday, September 29 (there will not be a separate registration day)

WHERE: Cow Palace, 2600 Geneva Ave., Daly City, CA 94014 HOW: Wristbands will be distributed beginning at approximately 7:00 AM on Monday, September 29. Auditioners will not be permitted to camp out and may not line up before 6 AM. Soon after they receive their wristbands, they will be told to enter the arena.