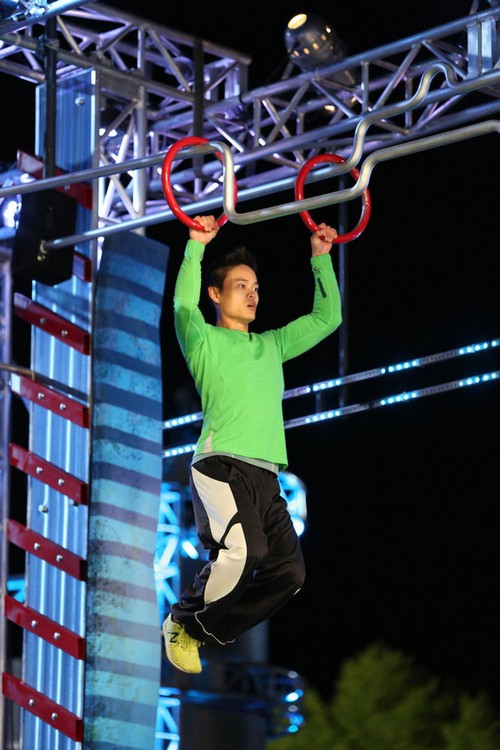 On the last episode of “American Ninja Warrior” ‘AMERICAN NINJA WARRIOR’ PRESENTS THE MIAMI FINALS – “American Ninja Warrior” travelled back to Miami, Florida where the top 30 competitors from the Miami Qualifier tackled the Miami Finals course. They faced the Salmon Ladder, Mine Field, Floating Stairs and Spider Climb. Akbar Gbaja Biamila hosted as Jenn Brown co-hosted. Did you watch the last episode? If you missed it, we recapped it all right here for you.

On tonight’s episode ‘AMERICAN NINJA WARRIOR’ it’s going to be an episode that’ll recap everything that’s happened during the show up to now, though they’ll only be showing the best runs of the season that impressed and had everyone in awe.

RECAP: Tonight we get a look at the best runs of this season so far, that have just made history this year. First up we see how the course took down several contestants this year until a walk on named Robery Ing, he flew down to wait in line to get on Ninja Warrior this year; he struggled on the slack ladder but some how made it to the swinging bars. He got through it fast and then moved on to the monkey pegs which he gets through fast, he then made it to the warp wall; Ing missed his first shot but runs the second time and was the first man to completely the qualifier round.

Next up we see Kacy Catanzaro, she was the very first woman to ever beat the qualifier round in the history of Ninja Warrior; she trained hard this year. Kacy made it through the log fast with her strong grip and even almost slipt off the next obstacle. Kacy got to the swing jump and makes it right across, she then got to the ring toss and makes it across; Kacy then got to the warp wall and no woman never made it before. Kacy runs up and misses it her first time, the second attempt is next and Kacy makes it and hits the buzzer; making history.

We next see Nremt Steffenson who lost on the salmon ladder twice last year, this year he wanted to redeem himself training very hard to achieve success this year. He is rushing right through the course and almost trips on the tilting table, he swings fast and jumps quick, now to the ring toss for his first time. He fell right into the water and was crushed about it, he was really upset about it.

Next up we see Rob Moravsky and it was his first time on the course, he was never big when he was young; just really small. He always wanted to be big and everyone would be amazed by his body, he’s tuned his body to do anything; he can get a date easy now than before. He goes to the gym and is excited all the time; he feels so prepared for this. Rob starts going fast and attacks the course strongly; none of the courses are even phasing him. He made it right to the warp wall and runs up it on his first shot.

We then had Michelle Warnky and is beloved because she hosts Ninja Warrior competition in her home town, she is just destroying this course rushing through it with pure ease. She got to the tilting ladder and rushes it so fast, she then becomes the second woman in history to make it up the warp wall.

We now take a look at Drew Drechsel who had the fastest time last year, he quit his job this year and trained at a Ninja Warrior school; he works there teaching parkour now. He rushed through the course and finished it in 44 seconds.

Then we had Flip Rodriguez and he wants to beat Drew, he fell on the spide jump; when he hit the water he was so sad. After that he started working harder, Flip started rushing through the course off the bat; he really wants to be the fastest time. While Flip is rushing his butt hits the water a bit while holding the net, he is completely destroyed; Flip is speechless and is just incredibly sad right now.

We next to see Megan Martin who is a rock climbing instructor, she grew up doing sports like gymnastics but loved rock climbing a lot; she is very girly though. She got to the spinning log and almost slips off, but hits the edge and climbs up. Megan then got to the stairs and is easily climbing right up it easily; she then got to the warped wall. Missing her first shot, but takes her second shot and misses again; this is her last shot. Megan goes for it and makes it to become the third woman to complete the qualifying round.

Next up we see the city finals, many people failed on an obstacle called cannonball alley, until the first person to complete it was a rookie who was a walk on named Kevin Bull; it was hist first time being on the show. He rushed through the first obstacles like nothing, he wanted to make sure he got to the next round. But what truly defined his talent was cannonball alley, he made all the way there and used a technique no one had before; he wrapped his legs around the last one and swung doing a back flip. He was the first man to complete the whole course as well.

Next up we see Kacy Catanzaro, she was the first one to conquer the qualifier course; though now she had to take on the city finals. Her height made it such a challenge to get through this course, but she got through the course and also became the first woman to complete the city finals as well; nothing is stopping Kacy.

Next up we see Joe Moravsky and his suspendful run through the city finals course, he was making good time on the course but accidentally broke the dice bar; making it off the track and being stuck. He swung from it and started pushing himself to go further, he went ahead and completed the entire course.

Next up we see the oldest contender Jon Stewart who is 52 years old, he has never been able to make it up the warp wall. He got to the city finals, he’s pushing himself to make it through the courses; he wants to prove that you can do this at any age. He is now at the warp wall, he fails his first shot, second time up he lsips down almost touching the top; it’s now the last chance for Jon. Jon runs for it and on his final attempt he makes it, he is so happy. Jon moves on to the salmon ladder; he makes it to the hoops and makes a far ranged dismount that has him land on the mat. He then makes it to the last obstacle the spider wall, Jon is going slowly up having some trouble but he will not quit; he makes it right to the top and is the older man to complete the course.