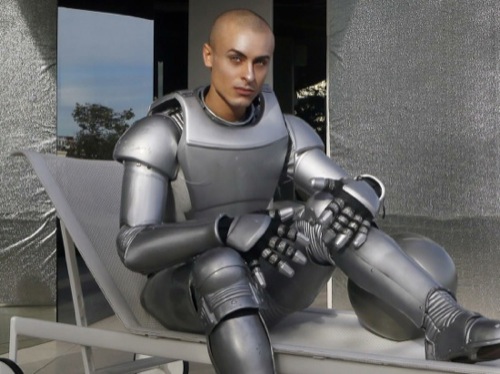 Tonight on CW Tyra Bank’s America’s Next Top Model returns with an all new Friday October 10, Cycle 21 episode 8 called, “The Girl Who Says It’s Over.” On tonight’s episode the models team up for a photo shoot challenge with judge Kelly Cutrone that results in two models recognizing the need to put their personal relationship on hold. Later, the models discover their common ancestry links when heritage comes into play as the styling concept for a futuristic sci-fi photo shoot that features a special guest posing as a robot.F

On the last episode the models tested their acting abilities when they competed for a walk-on role on a scripted TV series. Later, a frozen photo shoot turned icy after hurtful remarks were overheard in the house.

On tonight’s episode, models team up to for a photo shoot challenge with judge Kelly Cutrone resulting in two models recognizing the need to put their personal relationship on hold. The models then discover their common ancestry links when heritage comes into play as the styling concept for a futuristic sci-fi photo shoot that features a special guest posing as a robot,

Recap: Lenox is still riding high on her win in the last panel. Denzel is still trying to get across his point that he is not racist, he is just a prodigy of how he grew up.  Denzel and Mirjana are still flirting up a storm and Mirjana thinks she may have fallen in love with him. Lenox is worried that Mirjana is going to get hurt. Kelly Couture introduces the models to Nylon magazine, this is going to be there next challenge; they have to wear fashions from Kelly’s line Electric Love Army and make their shoot Nylon worthy. They have thirty minutes to pull this off and they are paired into teams of three. Matthew wants to make the shoot fierce and sexy, he says Raelia, who is on his team, should act like a high school slut.  Denzel has body oil on and Kelly gets annoyed when he is going to put clothes on over the oil.

Kelly confronts the models and tells them all off. Specifically, she tells Matthew that he should not have used the word slut. Then Kelly gives a little praise to each team, she chooses team Army; Keith, Shei and Adam.

Mirjana thinks she got low scores because she is too rapped around Denzel, meanwhile, he is thinking the same thing. Lenox goes to see Mirjana and tells her that Denzel said in front of everyone that he is not ready for a relationship. Mirjana calls Denzel out on the balcony and asks him right out if he has anything he wants to tell her. Mirjana tells him to move out of her room, it’s over. Meanwhile, when Denzel is telling the camera that he and Mirjana are done, he accidentally calls her a whore instead of saying her. Yikes!

Mirjana calls her boyfriend and tells him that she cuddled with and kissed. Her boyfriend is shocked, he reminds her that he has supported her from home; they both say they still love each other. Meanwhile, Will is thrilled than Mirana and Denzel are done.

Denzel is doing poorly on the shoot, he struggling after his breakup with Mirjana, as well, he has to pose with Cory. Will thinks Lenox is his biggest competition. After the shoot, Denzel and Mirjana talk; they both are still flirting, she tells him that she told her boyfriend the truth. They are back together and Mirana laughs that she is going to hell.

Will is disappointed that Mirjana and Denzzel are back together; in fact, Lenox is finding is really frustrating.

Time for panel, Tyra reveals that after judging she is going to reveal her DNA. Here are the scores