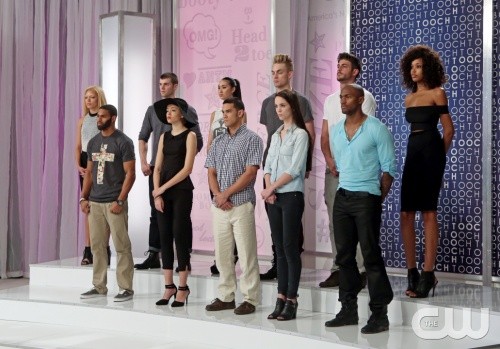 Tonight on CW Tyra Bank’s America’s Next Top Model continues with an all new Friday October 31, cycle 21 episode 11 called, “What Happens on ANTM Stays on ANTM.” On tonight’s episode highlights from the first 10 episodes of Season 21 will be shown.

On the last episode a model was brought back into the competition after fans cast their vote via social media. A challenge to keep their composure in the dark at a former slaughterhouse with a dark and gruesome history gave models the chance to win a special treat. Later, at a “no glove, no love”-themed fashion shoot that focused on awareness of HIV/Aids, Tyra Banks acted as makeup artist to the modeled donning a variety of ornate gloves. Did you watch the last episode? If you missed it, we have a full and detailed recap right here for you.

On tonight’s episode, catch up on the first ten episodes of Cycle 21 which pits guys versus girls in order for one up-and-comer to take home the title of America’s Next Top Model. What started off as 31 potential contestants is narrowed down to seven remaining models. Host Tyra Banks, welcomes Miss J back to the judging panel, along with fashion PR maven Kelly Cutrone and photo shoot consultant Yu Tsai to monitor all the on-camera drama.

A look back at cycle 21 reveals plenty of hidden gems the audience was left completely unware of until now. Like behind the scenes, there was actual moments when Romeo got along with everyone. A bit hard to believe now but it was once true!

His general conceit wasn’t apparent for a good while but when it did finally show up – it soured most of his relationships inside of the house with his fellow contestants. And funnily enough his main target ended up being Adam. Though that was odd because they used to get along. At least in the beginning. Then out of nowhere Romeo turned vicious. To Adam and practically everyone he viewed as underneath him.
It really was like a switch went off.

Then again a lot of things happened once the contestants got to the house that Romeo personally felt pushed him into doing certain things. For example, there was the occasionally hookup and there was also a lot of flirting/joking around going on. And at the time, Romeo had felt there was too much happiness and good cheer in the house so he deliberately set out to stir up some drama. Which he did and to great effect by the way.

But Romeo wasn’t the only one pulling crap stunts. His main partner in crime, Mirjana, did her own fair share of damage. She played her own twisted game of who she could pick up and break up with. First there was Matt and then there was Denzel. However there was a boyfriend back home that she was planning on breaking up with the second she returned all the while technically cheating on him on camera.

This was also the boyfriend that was openly drumming up support for her online in order to increase her social media score. So be sorry for that poor schmuck because he surely has realized his mistake by now!

Anyways, for someone with a boyfriend Mirjana was very confused about her feelings for Denzel. She believed she cared about him more than he cared about her. And in a hidden footage, she confronted him about it. She told him that she was going pull back some until he proved he cared enough.

Though she never did pull back and even some of the other girls in the house (including the ones that didn’t like her) ended up feeling sorry for her. It appeared like Denzel was only looking for a good time and no one thought Mirjana deserved that.

Later, in a yet another ugly confrontation, Romeo was once again at the heart of it. His excuse for going after people is that he doesn’t believe there’s enough competitiveness going around so he often challenges people to see if they honestly want to be there. But despite his atrocious behavior towards them, his fellow models did try to make amends with him.

The models arranged a birthday celebration for Romeo and that was the night Romeo got so drunk he physically went after Adam. And he was then thereby eliminated as consequence of assaulting someone else in the house.

Yet the tension in the house didn’t leave with Romeo. His twin was still there and Mirjana continued to get into arguments. Although there was some moments of relief in between. Like Will and Shei had lighten things up by imitating Adam.

Plus Miss J wasn’t afraid to make fun of Romeo’s witchcraft when he visited the house. And while Mirjana will get a lot of flak for the way she portrayed herself on this cycle – she did act as the bigger person when she and Will were fighting on set. It was she that approached him to apologize.

So she did leave last week on a semi-good note!