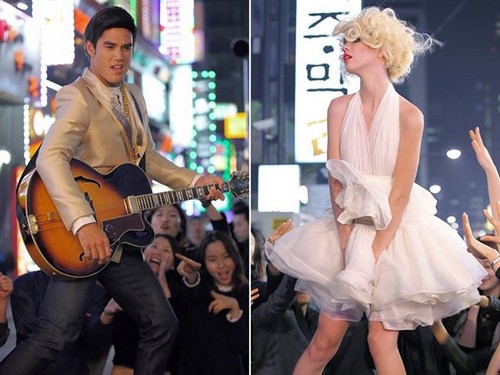 Tonight on CW Tyra Bank’s America’s Next Top Model continues with an all new Friday November 21, cycle 21 episode 14 called, “The Guy With Moves Like Elvis” and we have your weekly recap below.  On tonight’s episode the five remaining models perform a bilingual scene with Korean soap opera actors before taking part in a photo shoot in which they recreate iconic images of Elvis Presley and Marilyn Monroe. Later, the models confront demons from their past.

On the last episode the models raced to various locations around Seoul for a timed challenge, where one found herself isolated from the rest of the group after getting caught in a lie. Later, a model offended photo consultant Yu Tsai after she confronted him for calling her a panda bear during a head-to-toe photo shoot with Jinny Kim shoes and accessories. Kpop singer and actor Jay Park guest starred.  Did you watch the last episode? If you missed it, we have a full and detailed recap right here for you.

On tonight’s episode as per the CW synopsis, “the five remaining models perform a bilingual scene with Korean soap opera actors before tackling a night-time photo shoot that has them dressing up to recreate iconic images of the King and Queen of American pop culture: Elvis Presley and Marilyn Monroe. But history comes back to haunt the models when each is asked to confront demons from their past.”

Tonight’s episode opens up with the models talking about last week’s elimination.

The models learn they are doing a Korean soap opera and they are giving their lines and some of it is written in Korean.  The soap opera is called “Emergency Couple”.  The Korean actors in the soap opera are not only good actors but they look like models.

Will is up first and he is worried because he is gay and he has to act straight.  Will really tried his best and is hoping he did well.

Next up is Shei and she tried her best but they did not feel like she melded with her co-star.  Lennox is having a lot of problems, she is forgetting everything.  Lennox is really incomfortable.

Next up is Adam and he is confident, he thinks he is going to win and is very arrogant.  However, when he gets up and starts to act he has problems too.  Adam keeps twitching and they have problems focusing the camera.

Keith is up next and he goes blank and then he turns his alter-ego on.

The Korean actors judge how the contestants did.  – The Korean actors liked Keith they all felt he did a good job.  Everyone thought Adam was too stiff.  Shei was a natural actor.  Will needed to have more of an emotional connection.  Lennox need a better memory.  The winner of the challenge gets $1000 of sunglasses and the winner of the challenge is Keith.

Shei is pissed that Keith won.  Actually no one can understand how Keith won.  Shei says she needs to figure out how to get rid of Keith.

Time for the photoshoot – Yu Tsai is telling the models about what they have to do and Tara comes in and tells the girls they are going to be Marilyn Monroe and the men are going to be Elvis Presley.

Yu tells the models to make it strong.  The models head to set and there are so many people.

Will thinks he has it because he has a dancer background.  However, Will is not delivering it today.  Tyra comes up and gives him tips and help him out.  Although he struggled he got better.

Keith is up next “Jailhouse Rock Elvis,”  Yu is having trouble getting Keith to bring it.  Tyra goes over to help Keith and Yu is becoming frustrated with him.  Yu says with Keith it is like, “no one is home.”

Shei is excited but since she is a gogo dancer she is going to real it in.  Shei says she knows she can be a great model and she is going to try to not make it too sexy.  Yu says her poses are a little too sexy and it is not working.  Yu talks to Shei to try and help her.  After Yu’s talk Shei starts to get better.

Next up is Lennox. Tyra tells her it is cold and they are going to blow wind up her skirt.  Yu thinks this is going to be difficult because she has trouble with sensuality.   Lennox is having fun and she thinks she did pretty good.

Next up is Adam,  Tyra does his makeup and talks to Adam about his drinking and tells him he has to curtail it.  Adam heads on set he says he is cocky like Elvis and he is good looking like him.  Adam kills it and Yu loves it and thinks Adam is great entertaining the crowd.

Photoshoot over and the models get a message that tomorrow they will see the judges and only 4 will move ahead.

Tyra goes over the prizes.

First up is Adam he says he had a great time.  Ms. J loves it and so does Kelly.  Kelly thinks he is embodying Elvis. Tyra thinks he rocked it.

Kelly feels like it was a little trailer.  Ms. J wishes he gave them a little more sexy.  Tyra says she wishes there was more ooph.  Shei gets upset and is crying.

Miss J thinks his head looks big on his shoulders.  Kelly thinks it is not a great modeling shot.  Tyra thinks he is kicking ass.

Kelly does not think her legs are right and thinks she is not bringing it.  Miss J does not agree.  Tyra feels some of the styling is wearing her.

Kelly thinks he really did a good job.  She thinks Keith brought a lot of energy.  Tyra says it is good but she had to coach him for two hours.  Kelly tells him to be careful not to get a rep.

RESULTS –  the models that make it are going to be walking in a fashion show.

BEST PICTURE – ADAM (he is thrilled)

The finalists are Lennox, Keith, Will and Adam