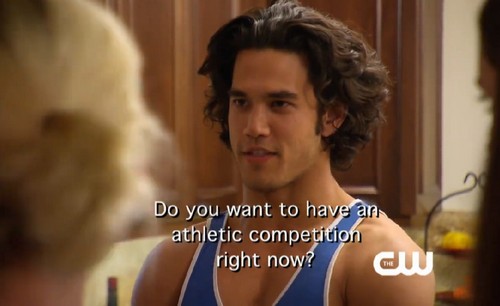 Tonight on the CW Tyra Bank’s reality show AMERICA’S NEXT TOP MODEL returns with the third episode of it’s 21st cycle called, “The Girl Who’s a Player.” On tonight’s show the final 14 contestants move into a house. At the revealing photo shoot, the models are given only string to wear. Later, Tyra explains how the season’s rain-themed introduction was put together.

On the last episode, the semi-finalists took part in a rigorous Los Angeles subway challenged to model outfits covering various seasons. Later, things got steamy during a nighttime photo shoot at a beach where the 14 finalists were chosen by Tyra and the judges. Did you watch the last episode? We recapped it all right here for you.

On tonight’s show the final 14 contestants move into their new home, just in time for tempers to flare and relationships to ignite. Models compete in a revealing runway challenge where the wardrobe consists only of silly string. Host Tyra Banks gives a behind-the-scenes look on how this cycle’s rain-themed intro was put together.

RECAP: The 14 finalist have been chosen and now it’s all about who’ll win out of this very fierce group… Picking up from where they left off from last week, the finalist have been surprised with a runway show. And though their focus should be on the upcoming show – behind the scenes certain contestants have taken to throwing others under the buss. Romeo had wanted Danny gone and in the end he got what he wanted. But now he’s focusing all that same negative energy towards Ivy. He and Mirjana consider her a threat so they want her gone.

When the truth is they don’t have to worry about her or worst case scenario – casts any spells. Ivy is intimidated by them already and has yet had the chance to come out fully out of her shell. So she could be her own downfall.

As for the fashion show, the models will be the walking the runway totally nude with only party string to offer them any sort of cover-up. But what they hadn’t realized prior to hitting the stage was that the audience would be spraying them with even more party string. Hence a few of them failed the challenge simply because they didn’t know how to keep modelling through the obstacles.

Still, there were a few that stood out and they were Chantelle and Keith. The judges found the latter to be very a la Tyson Beckford and just couldn’t resist naming him the challenge winner. And the one person he chose to join him in partaking the Tyra Suite at the new house – happened to be Kari. Who he knows most of the guys at the house have taking a liking to.

The Tyra Suite consisted of his own room and own bathroom. It truly is the best room in the whole house and sharing it with the prettiest girl is like a dream come true for Keith. Though he wasn’t only one trying to make a connection when they arrived at the house. Practically everyone was flirting and enjoying themselves minus Will who at this point can only be for others.

And something did come out of it. Matt has liked Mirjana from almost the very beginning and when he realized she was responding to his interests – the two of them took their flirt up a level. As in, they shared the same bed that night. Nothing came of it but by the next morning Matt was still feeling betrayed about Mirjana not mentioning her boyfriend until afterwards. While Mirjana doesn’t see that she did anything wrong. After all they all came to win a competition and not because they wanted to make a love connection.

The contestants had their photo-shoot and again Yu Tsai was in charge. Yu Tsai is very talented and taking on the job as permanent member of ANTM is fine as long as he isn’t the photographer on set. He tends to frighten the models and Will who was already behind in the completion just didn’t know how to please him. Everytime Yu Tsai opens his mouth to bark something – Will climbs further and further back into his shell.

Will isn’t the only one that’s letting the criticism get to him. Ivy has floundered and even Chantelle is right to worry about her photo. Chantelle’s hair doesn’t really react well when it gets fully drenched and that held her back right when she needed her confidence.

Later there was tension at the house. Mirjana had taken it upon herself to tell Adam to stop drinking and seeing as he wasn’t falling down drunk nor did he consider himself her responsibility – so he tried to ignore her and she told him “well that’s why you’re going home”. So that set Matt off. He was tired of Mirjana constantly judging people and told her to lay off.

The two of them got into a war of words and by the end of it whatever attraction that was there – was gone!

They even made that clear at the panel when Kelly tried to joke around with Matt. They both officially closed that door. However neither of them look like they’re going home what with their good scores. So they’re still stuck with each other going into next week.

From the photo-shoot – Keith, Lennox, and Mirjana were the top three competitors this week. Meanwhile the stranglers in the bottom two were Will and Ivy. They both faltered this week and sadly for Ivy; it cost her the competition so she was sent home.