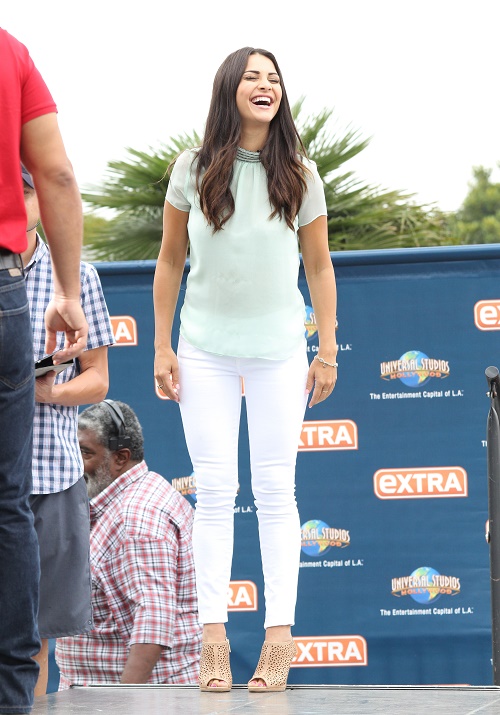 Season 10 Bachelorette Andi Dorfman and her “fiancé” Josh Murray are determined to ride out their ten seconds of fame until the wheels fall off. There are two types of Bachelors and Bachelorettes: the kind that ride off in to the sunset and get married and have babies and continue on with their lives, and then the kind like Andi Dorfman who just can’t seem to come to terms with the fact that their time to shine is over and no one cares anymore.

We’ve been saying for months that Andi Dorfman was on a quest for fame, not love, on The Bachelorette – and she just keeps proving us right…again and again. Andi Dorfman finally debuted the top secret project she has been slaving over and teasing on Twitter. Apparently, when Andi isn’t planning her never-going-to-happen wedding to Josh Murray (which by the way they still haven’t set a date), she has become an overnight clothing designer!

Andi took to Instagram and posted a photo of herself modeling a simple white tee with the word “Love” on it and announced, “Introducing my “Love Tee.” So excited for this collaboration with @southwardapparel. Check it out! Hope you love it! Get yours today! Available on southwardapparel.com #andiforsouthward.” And you too could own an “Andi Dorfman Love Tee” for the not-so-low price of $48.

Andi Dorfman’s “fans” are finally starting to see through the Bachelorette’s charades – and let’s just say that her clothing debut didn’t exactly go over well on social media. Andi’s followers launched a barrage of insults in the comment section ranging from “what a fame whore” to “seriously who would pay $48 for a tee shirt.”

So what do you think of Andi’s clothing designer debut? Will you be rushing out and purchasing her $48 tees? On a scale of 1-10, how quickly is this new business venture going to flop? Let us know what you think in the comments below!