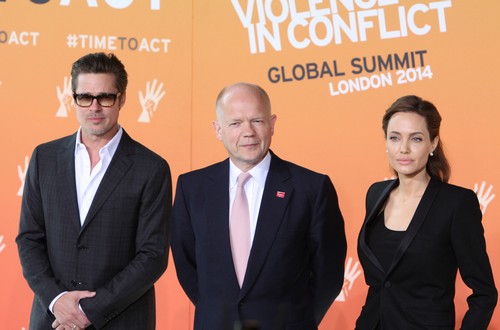 Angelina Jolie co-hosted the Global Summit to End Sexual Violence in London yesterday. And guess what? George Clooney‘s fiance, Amal Alamuddin, was also at the event. Of course, as a humans right lawyer, she was probably obligated to show up and take notes.

What is particularly interesting to note is that while Amal was present throughout the entire event, she was not sitting with either Angelina or Brad Pitt. The way the reports described it, she was sitting at the ‘opposite site of the stadium‘ from where Brad and Angelina were sitting. Now, I don’t know if she was required to sit in her spot due to some weird rules and regulations, but you’d think that they would make an exception for her, no? If Brad and Angelina really wanted Amal to sit with them, I don’t think anyone would have stopped them – especially considering that Angelina was co-hosting the entire event in the first place.

Aren’t Brad and George supposed to be BFFs? And since they’re supposed to be such good pals, shouldn’t Brad have invited his bestie’s fiance to come sit with them? Sure, George wasn’t there, but it feels like he should have made more of an effort to make Amal feel included. As it is, it does come off a bit like a snub.

Of course, it’s also possible that Angelina and Brad didn’t want anything to detract from the summit itself. If Amal was spotted hanging out with them, especially on a preferential bias, then I could see how the media would have made a big deal out of that, as opposed to concentrating on the details of the summit. And Angelina’s worked long and hard for this summit, and it’s understandable that she wouldn’t want any other celebrities detracting from it.