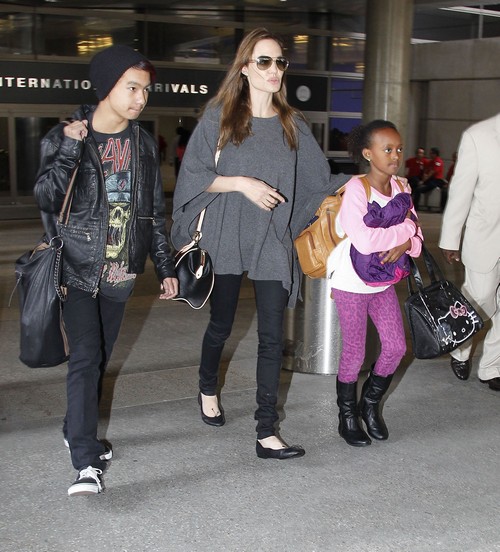 I think everyone was a bit shocked to learn that Johnny Depp and Amber Heard are engaged. I mean he had spend well over a decade with Vanessa Paradis, building a life and a family together and it seemed to me that if he didn’t marry her then no one would motivate him to walk down that aisle. Johnny has joked a bit about the fact that Amber is bisexual but the truth is it makes him insecure. He knows that she has had very serious relationships with women and that those emotional connections still linger.

According to the April 7th print edition of GLOBE magazine, Amber has admitted to having a huge crush on the equally bisexual Angelina Jolie and has said that a hook up would be on if Angie ever left Brad. The truth is, fidelity has never been Angie’s strongest point and to her sex is just sex. We have heard rumors of both Angie and Brad cheating in their 9 year relationship and if Angie found Amber appealing she would probably arrange a meeting.

What’s interesting is that Angie recently advised Johnny not to marry Amber. It kind of makes me wonder why that is and if something has already gone down between Angie and Amber. You know, she might be girlfriend material but in Angie’s eyes, not a wife. Should this potential pairing of Amber and his good pal Angie make Johnny nervous? Do you think he is suddenly interested in marriage because Amber is the right woman or because he feels more threatened by not marrying her? Tell us your thoughts in the comments below!