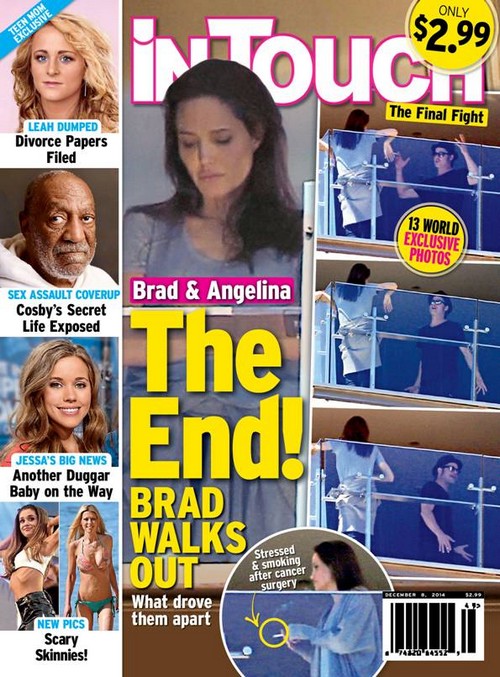 The latest cover issue of In Touch Weekly has a bombshell breakup story for its headline. IF the story happened to be true then Angelina Jolie and Brad Pitt could be headed for a breakup and divorce. Of course rumors of the demise of Brangelina’s relationship have been premature in the past and these might be no different. The paparazzi seems to have lucked out on pictures of Brad Pitt and Angelina Jolie fighting, and of course, they have fashioned a headline suitable enough to fit the photos. The End! Brad Walks Out! What Caused The Split! Will He Return To Jennifer Aniston! Ok, I’m Making Some Of This Up! But You Get The Picture!

Angelina Jolie is carrying what looks suspiciously like a cigarette butt in one of the photos, and that actually is a big surprise. Whether that’s weed, tobacco, or something else she’s smoking, it’s surprising at all to see that she still has one unhealthy habit remaining from her wilder, younger, crazier days. However, a ‘source’ claims that Brad Pitt and Angelina Jolie definitely, definitely had a serious fight. This same source tells In Touch Weekly, “They kept talking over each other and putting their hands up in anger. They were upset but getting nowhere. Angie looked like she was on the verge of tears.”

Well, that would explain the smoking. And all married couples [or for that matter, couples who have been together this long] fight, including celebrity couples such as Brad Pitt and Angelina Jolie. They’ve been together for ages, have six children together, and are obviously going to have some difficulties crop up now and again. That doesn’t mean that they’re BREAKING UP, even though the pictures certainly tell a nice story, huh?

In Touch’s sources also claim that Brad and Angelina were distant from each other during the Australian premiere of Unbroken, but according to film insiders that were present at the premiere, that didn’t seem to be the case.

What do you guys think? Would Brad Pitt ever actually ‘leave’ Angelina Jolie? Let us know your thoughts in the comments below.

Angelina Jolie leaves the set of the French TV show “Vivement Dimanche” at the Pavillon Gabriel on November 26, 2014 in Paris, France – by FameFlynet