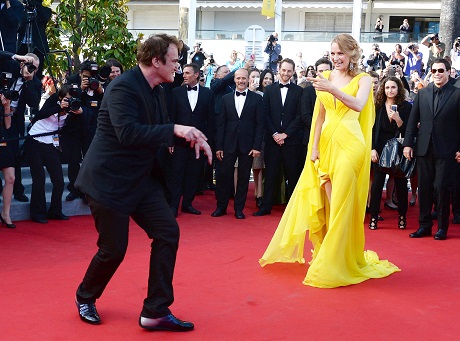 Angelina Jolie is one of those women that is simply never going to do anything that she doesn’t want to do, end of story. Unfortunately for Brad Pitt that means that Angie has no interest in hanging out with some of his favorite people, such as Quentin Tarantino. Of course, nothing is ever cut and dry and the reasons behind Angie’s unfriendliness are complicated.

According to the June 23rd print edition of The National Enquirer, Angie is still ticked off at Quentin for telling Howard Stern about smoking hash with Brad years ago. She doesn’t like Brad being linked to any questionable behavior and she thought that Quentin crossed the line.

Perhaps the real reason for Angie’s discomfort is a whole lot more personal though. Quentin is now dating Uma Thurman and Brad has desperately wanted to go on a double date with the new couple but Angie is dead set against it. Back in 2003, she starred with Uma’s then-husband Ethan Hawke in a film and affair rumors were rampant. Angie always denied any wrongdoing but Ethan’s marriage collapsed soon after and she has always chosen to steer clear of Uma.

Brad thinks that this could be the perfect time to actually discuss things once and for all and clear the air but Angie is having none of that. Do you think that something actually did happen between her and Ethan?