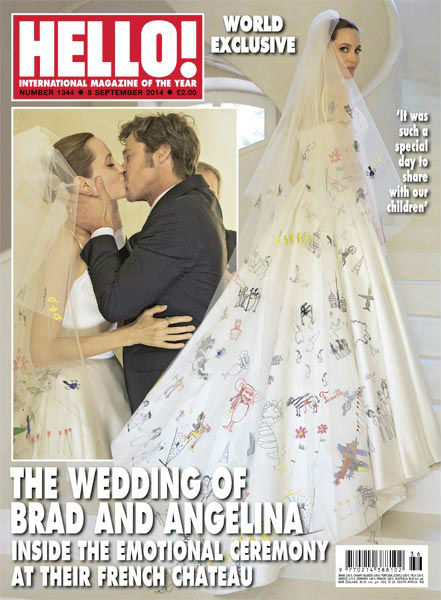 Angelina Jolie and Brad Pitt might announce a new addition to their family in the form of a baby or child either through pregnancy or adoption this Oscar season. Angelina Jolie and Brad Pitt finally got married, supposedly because their children were putting pressure on them. And I’m sure it had nothing to do with the fact that both of them have awards campaigns coming up this fall, no siree.

Come on guys – Angelina Jolie and Brad Pitt are master media manipulators, and they know exactly how to play the system. In fact, they do it better than any other celebrity couple out there, which is why they continue to be the biggest celebrities in the world. I’m sure they wanted to get married, and I’m sure their children also wanted to them to get married – just as I’m sure that the timing was not a coincidence, especially not as Fury and Unbroken both started to create a lot of Oscar buzz.

Keeping that in mind, will any of you be shocked if Angelina and Brad announce another adoption in the fall? Angelina’s probably not having another biological kid, not with her final cancer preventative surgery [oophorectomy] coming up. However, that doesn’t rule out adoption by any means, especially if Brad and Angelina were already planning to do it. That way – just like with the wedding – the adoption serves two purposes. Not only can Brad and Angelina add to their family – which I am sure they want to do regardless – but they can once again boost their Oscar chances. Brad really wants an Oscar and Angelina as well, make no mistake about it, these two people care about success and the trappings of success hugely. And if you think that Oscar voters don’t care about pregnancies, adoption, or babies, think again. Natalie Portman based her entire Black Swan Oscar campaign on her pregnancy a few years ago, and it single-handedly won her that Oscar. Don’t underestimate the power of a well-thought out baby campaign, especially when executed by media masterminds like Brad and Angelina (or their team, of course).