Angelina Jolie And Brad Pitt Upset Maddox Jolie-Pitt Has Crush On Kylie Jenner – Must Put A Stop To His Infatuation! 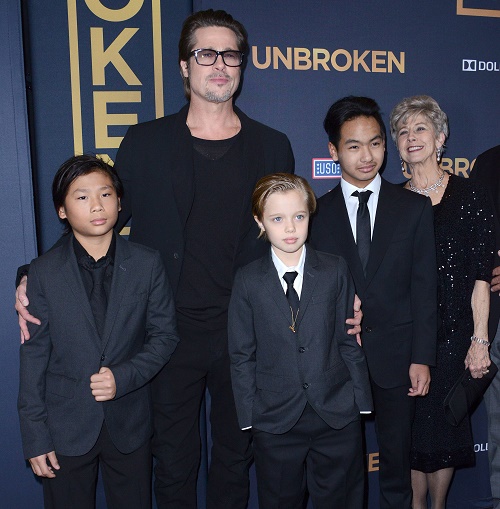 Oh no, poor Maddox Jolie-Pitt. He’s now officially been initiated into the tabloid world, after he’s hit the golden age of 13 years old. It was bound to happen, right? Angelina Jolie’s and Brad Pitt’s oldest child was never going to escape the media attention completely, even though his parents have tried their very best to limit his interaction with the tabloid world in general.

According to the National Enquirer [of course they were the first ones to jump on the Maddox bandwagon], Angelina Jolie and Brad Pitt are very upset by the fact that Maddox Jolie-Pitt has a crush on Kylie Jenner. Um… ok.

A ‘source’ tells the Enquirer, “Madd is infatuated with Kylie. But there’s no way Brad and Angie would allow their kids to cavort with a Kardashian! Brad and Angie have been very careful to restrict their kids’ access to TV and the Internet — but they couldn’t keep Kylie off Madd’s radar. They’re crossing their fingers that Madd’s crush blows over!”

Pray, tell – when would Maddox have had the time to become ‘infatuated’ with Kylie Jenner or develop a crush on her? I highly doubt that Brad and Angelina let their children watch reality TV, especially starring the Kardashians, considering that they hire people to police their children’s Internet habits. Give them a little more credit than this, right?

Plus, I’m sure that Brad Pitt and Angelina Jolie know who the Kardashians are [how could you not, in this day and age], but they’ve always said that whatever their son wants, they’ll allow – to a degree. Him being obsessed with a Kardashian isn’t a big deal, so long as he doesn’t actually try to meet that Kardashian. And honestly, Maddox doesn’t strike me as the type to go after Kylie Jenner, especially since he reportedly already has a girlfriend anyway.