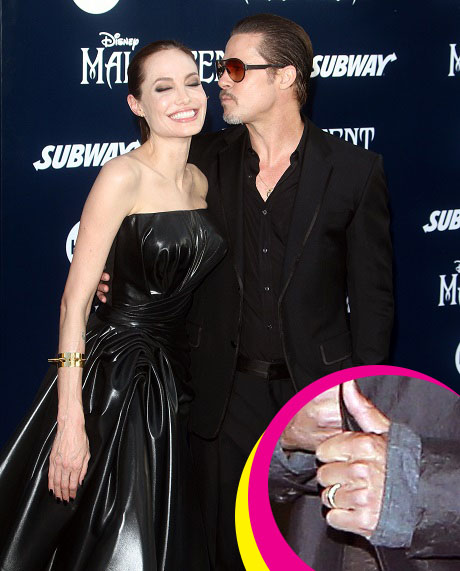 Angelina Jolie and Brad Pitt finally took the plunge and decided to tie the knot. Brangelina has always been one of those solid Hollywood couples, and it was one of those things where everyone knew they’d get married — eventually. In the past, they’ve always been quite outspoken about the institution of marriage and how they didn’t need it to be a strong, loving family, which they definitely are and continue to be. However, I guess it seems they wanted to be documented life partners, because Brangelina, folks, is now officially a thing. By law.

In his first post-wedding appearance, Brad Pitt gave the world a glimpse of his wedding ring, which is perfectly stylish and suitable for the 50-year-old actor. Brad was attending an event for his upcoming film, Fury, wherein he stars alongside Logan Lerman and Jon Bernthal. The movie looks quite good. BUT, while at the photo call, most of the photographers were just interested in getting that coveted ring shot.

As we reported earlier, Brad and Angelina tied the knot in a private civil ceremony on Saturday. The location? The Chateau Miraval in Correns, France. They obtained a California marriage license but chose to conduct the much anticipated ceremony abroad. What do you think about the Brad Pitt/Angelina Jolie marriage? Take a look at Brad’s ring below and let us know what you think!