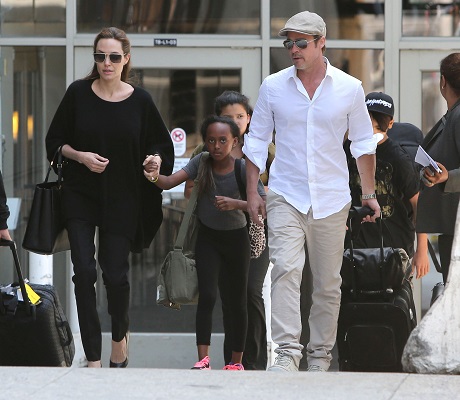 Angelina Jolie has faced plenty of lawsuits in her lifetime, most recently from authors and writers who claim that she’s ripped off their work. Most of the time, they’re just looking for their fifteen minutes in the spotlight, but this latest author just isn’t giving up. James Braddock, the author of The Soul Shattering, sued Angelina two years ago for supposedly taking the story of In The Land Of Blood And Honey from him. That movie served as Angelina’s directing debut, and I guarantee that Mr. Braddock here wouldn’t have cared if some low level first-time director had made it.

Anyway, he sued Angelina, but the judge ruled in her favor against James’ allegations. Obviously – the guy had no proof! However, James refuses to give up and has now filed for an appeal for the same case.

James Braddock’s explanation for filing a plea is that the judge was biased and didn’t use a proper system for deciding the copyright issues. The appeal papers that he filed read, “The Court’s decision noted a number of material errors, starting with clear descriptions that are interpreted or translated incorrectly, to the downgrading of a complex of the work. The court did not compare the whole scene at all elements, but he pulled the individual parts!”

In plain English, that means that his own novel wasn’t transcribed properly, and so it would have been impossible to see if it was similar to Angelina’s In The Land of Blood and Honey. He also claims that the judge didn’t look at all the materials, and he wants a second chance to prove his case. Plus, he references a producer of the movie who had mentioned acquiring his book, although Angelina went ahead with her movie without consulting with him in any way, shape, or form.

Oh, come on. Yes, there are plenty of writers who steal from other people, but I really don’t think Angelina would have taken such a risk for her first directorial effort. She may have been inspired by elements of James’ book, especially if they were thinking of acquiring the rights and adapting it, but there are enough differences between both of them that it’s not a copyright issue any longer.

Just because they’re both about the Serbian war and deal with similar characters doesn’t mean that Angelina stole the idea. It just means that they were both drawn to write about the same things, issues that are still glossed over by the media and modern society.