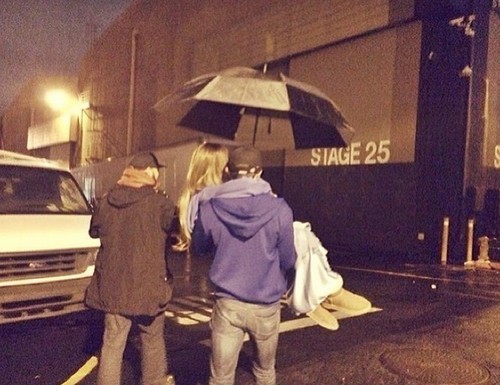 Ariana Grande’s diva behavior knows no bounds, and if you want further proof of that, look no further than the latest report from In Touch Weekly. According to several sources, Ariana Grande’s latest demand is that she has to be carried like a baby whenever she doesn’t feel like walking.

In Touch’s sources explain, “Her new rule is that she has to be carried — literally carried like a baby — when she doesn’t feel like walking. She says that she doesn’t want her precious feet to hit the floor. Everyone was stunned. Ariana is such a diva.”

You know who else does this? Mariah Carey. As we’ve said many times in the past, Ariana Grande is trying to become the next Mariah Carey, in more ways than one. But what she doesn’t realize is that during Mariah Carey’s ascent to the top echelon of the music industry, the 24/7 media and Internet coverage didn’t exist. That means that Mariah Carey’s step-by-step and event-by-event diva behavior wasn’t cataloged away into everyone’s minds, but rather forgotten as soon as she delivered her first hit.

Now, while Ariana Grande definitely delivers on the music [as much as I hate to admit it], her behavior is slowly starting to crowd out any career success. People are no longer associating Ariana Grande with her music, but rather her disgraceful diva behavior and ungrateful demands. If this continues, it’s only a matter of time before the public turns on her completely, and if the public deserts her, then so will her the producers, managers, writers, and everyone else working for her.

What do you guys think? Will Ariana Grande last much longer in the music industry with this kind of attitude problem? Let us know your thoughts in the comments below.