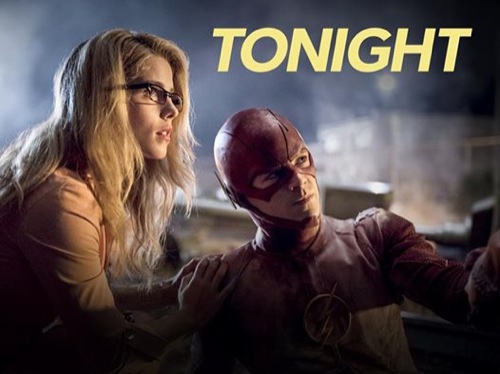 Tonight on the CW returns with an all new Wednesday, October 29, season 3 episode 4 called “The Magician.” On tonight episode, Oliver and Nyssa join forces and go after the Dark Archer in order to bring Sara’s killer to justice. Meanwhile, Laurel keeps her distance from Nyssa because she blames her sister’s death on the League of Assassins; and Oliver and Roy work on repairing their respective relationships with Thea.

On the last episode, Oliver decided it was time for Thea to come back to Starling City, so he packed for Corto Maltese, where Felicity had traced Thea’s whereabouts. Lyla asked Diggle to go with Oliver because one of her field operatives, Mark Shaw, had gone dark in Corto Maltese and she’d like him to look into it. Feeling responsible for Thea’s departure, Roy joined Oliver and Diggle on their journey. Shaw double-crosses Diggle, putting numerous A.R.G.U.S. agents, including Lyla, at risk. Meanwhile, Laurel met Ted Grant , and Felicity adjusted to her new job. Did you watch the last episode? If you missed it, we have a full and detailed recap right here for you.

Tonight’s episode picks up with Nyssa. She had come to Starling city looking for Sara but with one look at Oliver – she was able to figure out what happened. And with surprising accuracy by the way.

Nyssa knew before she even asked Oliver that Sara was killed with arrow. So Oliver eventually had to demand information from her. Because the bottom line is he’s already tried to investigate Sara’s case on his own and that lead him nowhere.

Hence he needs Nyssa’s help. She’s the only one with a suspect and she at least knows why Sara was sent to the city in the first place. Apparently Sara was tracking down a rogue and former member of the League of Shadows – Malcolm Merlin.

The League has been after him for a while now and yet he’s managed to evade everyone so far. Including Sara who was mysteriously murdered a couple of weeks ago as she was on the mission to capture him. So it’s only logical that Nyssa believes Malcolm murdered her lover. Sara was too well trained to have been taken by anyone below her own skill level.

And in case anyone forgot – Malcom was once one of Ra’s al Ghul’s best assassins!

Nyssa wanted to find Malcom and kill him. But the problem was she didn’t know how to find him and so that’s where Laurel comes in. Over the course of her investigation, Sara had went to her father for information. And seeing as Laurel wanted to maintain the lie that Sara was still alive – she’s the one that had to go to her father for whatever he gave Sara.

That didn’t stop Nyssa from showing up unexpectedly at the police station but she did go along with Laurel’s wishes in the end. They agreed they didn’t want to hurt Lance and soon the two of them even found more common ground. They both want Sara’s killer’s dead yet they realized Oliver is standing in the way of that.

Oliver doesn’t kill people anymore and he merely nicked Malcolm when he got close enough to actually kill him. So the ladies want to write Oliver off because he’s not prepared to do what they feel MUST BE DONE!

Oliver later arranged a meeting with Malcolm. He wanted answers and unlike everyone else amongst his friends, he just wasn’t going to kill someone to make himself feel better about a loved one dying on his watch. However the meeting with Malcolm didn’t go as he planned.

He thought he would get a gist of Malcolm’s agenda from it but what he learned is that Malcolm only came back to the city for one reason and that was to protect his daughter. Malcolm is worried about her and he doesn’t feel like she’s safe in the city.

He told Oliver that he wouldn’t risk killing Ra’s al Ghul’s daughter’s girlfriend. That would bring down the entire league on his head. And more importantly on Thea’s head seeing as the League has never shied away from collecting leverage.

After he heard all of that, Oliver chose to believe Malcom was telling the truth. He doesn’t think the other man would lie when he swore on Thea’s life. But Nyssa still thinks it was him. So she doesn’t want to hear whatever sad story he sold Oliver.

She simply wants to kill and because Oliver let the cat out of the bag with Thea – Nyssa wasn’t afraid to use a friend’s sister to get what she wanted.

Nyssa kidnapped Thea and she used it to draw in Malcolm. Though Oliver ended up thwarting her plan by interfering. According to him, while Malcolm resides in his city then he’s under Oliver’s protection. And that goes especially for the League of Shadows. If they want Malcolm then War with him!

So Nyssa returned home and she passed on Oliver’s message to her father. If its War Oliver wants then its war he’s going to get!