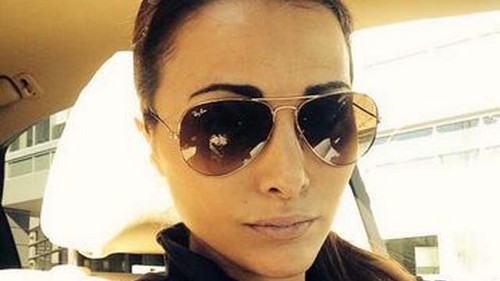 The internet seems to still be hung up on Season 18 of The Bachelor and Juan Pablo’s bizarre antics, but The Bachelor franchise is moving on and saying “good riddance,” and has already began filming Season 10 of The Bachelorette featuring Andi Dorfman.

Of course, our favorite Bachelor spy and blogger Reality Steve has already began spoiling Season 10 of The Bachelorette, and recently revealed some details about Andi Dorfman’s first group date. Andi Dorfman and 14 of her bachelors in waiting headed to OHM Night Club in Hollywood, for an insane night (but hey it was all for charity). Andi was joined in the audience by her BFF’s Sharleen Joynt and Kelly Travis, and the threesome drooled over Andi’s new eye candy while the bachelors danced, and stripped on stage. Apparently the bachelors were dressed as sexy firemen, GI Joe, cowboys, and even a robot and a pilot, and after the performance they made their way through the crowd half-naked while women stuffed the Bachelor’s underwear with tips. There’s no news yet on who Andi rewarded with a Group Rose after the date.

Andi has also had at least one 1-on-1 date, with a bachelor named Eric Hill. Hill is a Human Biology graduate from Utah who is currently filming a documentary of himself travelling around the world and visiting every country recognized by the United Nations. Rumor has it Hill may have joined The Bachelor just to promote his film, titled “The Global Odyssey.”

Season 10 of The Bachelorette featuring Andi Dorfman is set to premiere on ABC on May 19th. CDL will be posting more 2014 Bachelorette spoilers as they are released.