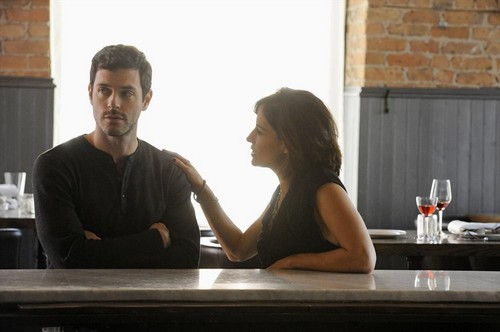 Tonight on ABC their sensual and gripping new drama BETRAYAL continues with a new episode.  On tonight’s show called, “Sharper than a serpent’s tooth…” the Mrozek murder investigation reaches a fever pitch.  Did you watch the last episode?  We did and we recapped it right here for you.

On last week’s show Jack’s confession sent shockwaves through the McAllister and Karsten families. As Elaine, Valerie, Victor and TJ came to grips with a future of Jack being in prison, the truth about Lou Mrozek’s murder finally became clear. Meanwhile, Sara was resolved to exonerate her lover and tried to find evidence to clear him by revisiting their past.

On tonight’s show While Jack and Elaine struggle to navigate this turbulent time with their kids, Sara and Drew may be falling back into old habits. Meanwhile, Jack and Drew decide to put their differences aside and work together in the case against Karsten, revealing hidden truths.

As long as Drew can hold Victor’s crimes over his dad’s head then he has complete control over Jack. Thankfully, he’s using this power for good. He had gotten Jack in front of grand jury and is forcing him to give evidence against Thatcher. And yet with all the juicy tidbits Jack is giving; the feds have to warn him that they might get Thatcher on merely a five to ten sentence. Jack isn’t stupid. He is a lawyer after all. He knows with those odds that Thatcher could get out after three. Drew doesn’t really care about that part though. He knows with Jack’s compliance he can dismantle all of Thatcher’s empire, but the afterwards doesn’t necessarily concern him.

That was until someone broke into Sarah’s studio. Assuming it is in fact Thatcher’s people, they ransacked her place and left a threating message for her. It told her she had to shut up Jack. Guess they don’t know about the breakup. Either way the whole stunt was risky and reeks of desperation. Earlier Thatcher tried to get one of his cops on the take, Anderson, to destroy evidence from the grand jury. It couldn’t be done. No ordinary cop could get near a federal case. Does that stop Thatcher from wanting some action to be taken? No!

Sarah was shaken after what had occurred and Drew offered her safe place to stay for a while. They’ve been getting along recently. Even after the divorce papers were served and they were able to agree to custody arrangement without any disputes. But he hadn’t confessed to anyone that he was separated. An old colleague of his asked after his family right in front of Jack and the lover saw the husband play up the family man angle. Drew knew what he was doing when he spoke of Sarah’s accomplishments.

Jack sat his kids down with Elaine by his side. He told them about their grandfather and how he was testifying. Victor was really furious with his dad. To him it seemed like his dad was being hypocritical. Why was it ok to cover up Victor situation and not Thatcher’s? Val on the other hand was confused over her brother’s anger. She knew he was acting strangely and she wanted to know what the secret was. She knows there is one and gets frustrated when no one would tell her.

Sarah quickly returned back to her own place. She had slept with Drew, but they agreed that it was just a fluke. When she got back to hers though; she ran into Jack. The talked and he showed concern. Really that’s all there was to it. They did not decide on reconciling although the cop Drew had watching Sarah’s building thought it looked that way. The detective did it as a personal favor for Drew and he took pictures of Jack with Sarah figuring Drew should know. Drew saw the photos and lost it. He was supposed to be preparing Jack for court when he went on the rampage. He attacked Jack.

Men in the courthouse had to pull them apart. Later Jack explained he was only checking up on Sarah. He tells Drew about them splitting up weeks ago. Not that it should matter because as far as Jack is concerned; he thinks Sarah got back together with Drew. No one has told him the truth about that particular lie yet.

Drew agreed to work with Jack in finding more evidence. They plan on pinning Thatcher down on a murder charge. It is the only way they can reach for a maximum life sentence. Surprisingly, Sarah’s friend, Nate, might help them. He looked into Jack’s parents as a favor for Jack. What he found is that Jack’s parents basically went off the grid. There is no paper work of them before or after their deaths. It’s like they were erased.

Val finally had enough and confronted her mother. She needed to know why everyone suddenly got quiet whenever she entered the room. Elaine made her promise to keep the secret in the family beroe telling, but ultimately learning what Victor did was too much. She couldn’t continue to be around him and so she packed up her stuff and went to go stay with her girlfriend. Victor felt like everyone hated him and the only other person he could turn to was his grandfather.

Thatcher set up a secret meeting with Victor. It was there he told Victor how none of this was his fault and no; no one hates him. He then went on to say the whole problem wasn’t even Jack’s fault. He said all the problems occurred because of Sarah. She was the one to upset their family. Prior to the heartfelt bonding moment, Thatcher went to an old friend to arrange justice. He planned on getting a hit man to take care of Jack. Yet his detective betrayed. Anderson chose to fill Jack in on the plan and double cross Thatcher. This way he can get out from under the crime boss’s thumb as well. Thatcher was the one to point out that no one liked a dirty cop.

Jack is safe and all he wanted to do was be with Sarah. Nate had told him she didn’t want to end things with him. Drew had made her push him away. So it was with new hope, Jack went to her art show. If only he arrived a little bit earlier. Someone caught Sarah alone and shot her. Odds are it was Victor. He’s easily led and has his grandfather’s temper.