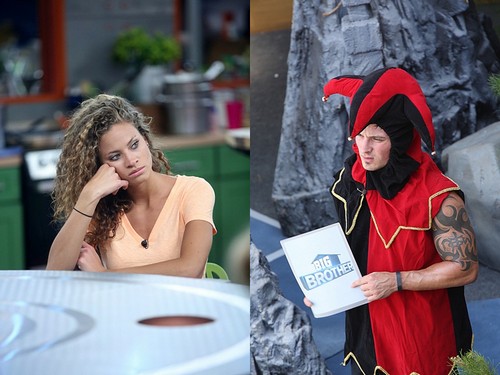 In reality television, controversy sells. Big Brother 16 certainly is fully aware of this and they surely welcome the crazy antics that go on within the house. Still, one has to wonder if the line has been crossed. Are there limits to Big Brother’s acceptance? Is there even a line that can be crossed to cause someone to be ousted? If you look at some of the things that have happened within the Big Brother 16 house, you have to wonder…

Consider the racial slurs that have been thrown around the home during various seasons. Consider the bullying behavior and mental torture that some contestants have gone through. Yes, there have been some Big Brother guests removed for certain things. Most notably, Big Brother contestant Willie Hantz (Brother of Russell Hantz) was removed after headbutting a fellow contestant. So clearly Big Brother is not going to put up with actual physical violence. But what about other types of violence?

Caleb Reynolds had literally stalked Amber Borzotra throughout this season, harassing her in every way possible. In fact, she has been mentally tortured so much that you could almost see relief in her eyes by the time she was voted off the show. Getting away from his menacing, threatening behavior has got to be a welcome thing for her.

Why did Big Brother allow such behavior to continue? How is this not just as bad as headbutting someone? (The headbutt did not harm the other houseguest in Hantz’s case) Both behaviors are deplorable and illegal outside the house, so why not remove Caleb when it became clear he was obsessed?

True enough, Big Brother may have pulled Caleb into the Diary room and gave him a good tongue lashing. We don’t know what went on behind the scenes. That said, Caleb directly caused Amber to be eliminated from the home through his stalking behavior. Amber could not navigate the game under such circumstances and she should not have been put in such a position.

Likewise, previous house guests that were put under undue stress due to racial slurs and pressure of that type should have gotten help. A racial slur should bring a serious warning and a second offense should send them packing. The same should be said for stalking. In some cases like Caleb, he needed to be ousted the moment he began standing over her bed while she slept. That is not something that should have been allowed to go on.

Big Brother is one of my favorite shows but it makes me sick to see Caleb still there while Amber is gone. Big Brother most definitely should be ashamed of themselves.

There has to be a line drawn somewhere.