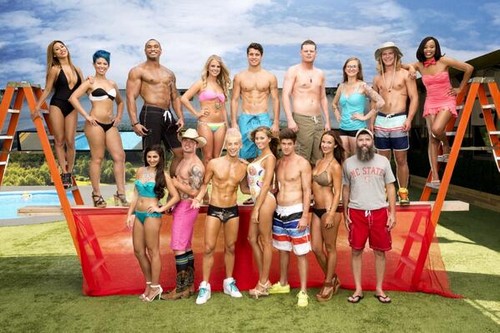 BIG BROTHER returns to CBS tonight with its 16th season and I have to admit it is my guilty pleasure and Celeb Dirty Laundry will be covering all the fun live.  On tonight’s episode the contestants move into an urban dwelling with a tree house theme; new twists are revealed.

For those of you who are not familiar with the show, Big Brother is a television reality game show based on an originally Dutch TV series of the same name. The show follows a group of houseguests living together 24 hours a day in the “Big Brother” house, isolated from the outside world but under constant surveillance with no privacy for three months.

On tonight’s show we are going to be introduced to this season’s cast members and there are 16 new ones. Host Julie Chen announced some changes for this season; there will be two houseguests that will win the Head of Household (HOH) each week and winning HoH does not mean that you are safe.   The “Battle of the Block (BOTB)” will shake up the power in the house and fans will influence the game by participating in “Team America,” which is an “interactive twist.”  According to CBS it is going to be the most, “twisted summer ever” and I cannot wait.

Big Brother 2014 airs tonight at 8pm with its premiere episode, we will be live blogging the show with all the up-to-the-minute details so make sure to come back to Celeb Dirty Laundry and watch the show with us. Can’t wait to see how all the drama plays out, how about you?  Are you excited about the new season?

The two night season premiere of Big Brother 16 kicks off now with host Julie Chen. Chen reveals there are two new twists this summer that will change the game like never before. The first eight houseguests to be moving in to the Big Brother house are:

Julie reveals to those first eight houseguests that they are up for the “most twisted summer of Big Brother ever.” She sends Cody, Amber, Donny, and Joey in to the Big Brother house. They begin racing through the house and looking for their bedrooms. Amber and Joey automatically choose a room together. After a few minutes, Julie lets Devin, Paola, Frankie, and Nicole enter the house. Frankie and Joey instantly gravitate towards each other and their funky hair styles.

The houseguests quickly realize that there are way more beds, and there is no way there are only eight houseguests. They head to the living-room and pour their champagne and begin introducing themselves to each other; Frankie has no intention of revealing he is Ariana Grande’s sister, but he is scared that Paola may recognize him since they “run in the same circle.”

Once the first eight houseguests are acquainted with each other, they begin talking strategy. They know more players are coming so they decide to form an alliance of eight and call themselves the “Crazy 8s.” Devin decides to make a side alliance with Donny, because he knows no one will ever expect those two to pair up. Meanwhile, Paola tries to form an all-girl alliance with Amber, Joey, Paola, and Nicole.

Julie summons the eight players to the living-room, and reveals that they are about to compete for HOH. However, just because they are HOH will not mean that they are safe. The houseguests are shocked, and confused. After the TV turns off, the players begin panicking and try to figure out what Julie is talking about and how an HOH could not be safe.

A few hours later Julie tells the players to put on their bathing suits and head out to the backyard. The entire yard has been transformed in to a sandy beach. Julie reveals that each house guest has a kite, and must stand on a rotating log holding on to their kite string, the last player standing will be the first HOH.

Paola is the first house guest to fall and is out of the competition first. Joey falls soon after. With sixhouse guests remaining, they begin dumping on sunscreen lotion on the players. Nicole falls soon after. The final five include: Amber, Frankie, Donny, Devin, and Cody, and they are thrown for a loop when the log stops and changes direction. Donny is the next player to fall, immediately followed by Devin. The final three are Frankie, Amber, and Cody. Cody falls next, and Nicole decides to throw the competition. Frankie is the first official HOH of Big Brother 16.

Frankie isn’t exactly thrilled about being the first HOH though, because he can’t stop thinking about what Julie said about HOH being in danger. Julie calls the contestants back to the living-room and reveals that another eight houseguests will be joining them and one of them will also be the next HOH. She also reveals that, at the end of the week, there will only be one HOH standing by the end of the week.

While the houseguests panic over the latest twists, Julie reveals the next twist called “Team America.” According to Julie, America is voting for three players that will form America’s Secret Alliance. And throughout the summer America will get to send the three members of their alliance on secret missions.

Tomorrow night, Big Brother 16 will return for another premiere night and the second group of eight players will enter the house and compete for HOH.