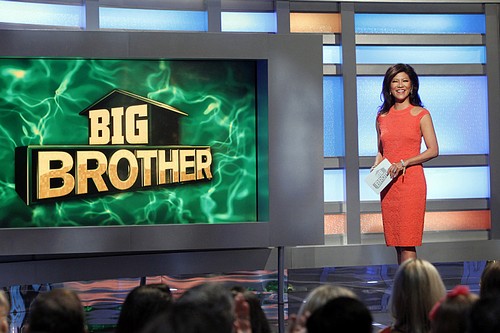 Tonight on CBS BIG BROTHER returns for the tenth episode of their 16th season. On tonight’s episode the house guests vie for the coveted power of veto.

On the last episode Nicole and Derrick celebrated their HOH victories. At the nominations ceremony, Nicole put Amber and Donny up for eviction, and Derrick put Jocasta and Caleb up on the chopping block. Derrick found a letter for Team America, giving the first Team America challenge. Derrick, Donny, and Frankie had to spread a rumor and convince three house guests that one of the players were related to a Big Brother veteran. They decided to convince everyone in the house that Zach was Amanda Zuckerman’s (from Season 15) cousin. Did you watch the last episode? If you missed it we have a full and detailed recap, right here for you.

On tonight’s show once again the house guests get together for a challenge, which has them going up against each other for the power of veto.  If you cannot wait until tonight’s episode we have already spoiled the episode for you and you can head over and find out.

Tonight’s episode of Big Brother 16 picks up exactly where we left off after the last episode, Nicole has just been dethroned and reappears in the kitchen in a frog costume. She reveals to the other players that she has to wear the costume for the entire week, since her nominees lost the Battle of the Block competition.

After the Battle of the Block competition, Devin is convinced that Derrick plans to backdoor him at the Power of Veto ceremony. After the competition, Jocasta is exhausted and begins throwing up. She can barely even stand on her own two feet, and Caleb helps her in to the bathroom. Caleb feels a little guilty that he threw the competition and Jocasta is stuck up on the block as sick as she is.

Christine and Victoria comfort Nicole and reassure her that her frog costume is actually kind of cute. Hayden jokes that usually the princess kisses the frog, but he’ll make an exception and kiss the frog. Meanwhile Amber is getting a massage from Cody and complaining to him that she doesn’t like Caleb and she wishes he didn’t throw the competition for her, and little do they know, Caleb was listening to their entire conversation. Later, Caleb takes Cody aside and asks him if there is anything going on between him and Amber. Cody reassures him there is nothing between them.

Derrick and Cody strategize up in the HOH room, Cody confesses that he wants to get Caleb out of the house. Cody knows that Caleb is going to come after him because of Amber. If for some reason they don’t win the POV and they can’t backdoor Devin, they are considering voting Caleb out.

Team America, Derrick, Frankie, and Donnie, received their first mission. And, they had to convince the entire house that someone in the house was related to a previous cast member. Team America decided to spread a rumor that Zach is Amanda Zuckerman’s cousin, and everyone in the house bought it. Mission accomplished.

It’s time to pick players for the Power of Veto player drawing. Only five people will be playing because Jocasta is still sick. Caleb and Derrick will be joined by Christine, Donny, and Devin. Derrick takes Donny aside and tells him that they are planning to backdoor Devin. Donny is annoyed because this is the third week that he has been out of the loop and no one told him that the plan was to backdoor Devin. Derrick is scared that Devin and Donny are still in the “Double D Alliance.”

It’s time for the power of veto competition. The houseguests head outside and the back yard is transformed in to life-size casino games. The houseguests have to climb in to huge dice, and flip themselves so that the number facing up is the number drawn (like 3-dimensional craps). Devin and Christine face off first, and Devin wins. Christine is out of the comp. Now, Derrick faces off against Devin, and loses as well. Donny manages to meet Devin and knock him out of the competition, and now it is just between Donny and Caleb. After the last round, Donny is victorious and wins the Power of Veto.

After the POV contest Donny runs in to the bedroom where Jocasta is sleeping and wakes her up and announces to her that he is going to use the POV and take her off the block since she is so sick. Jocasta starts crying hysterically because she is so grateful.

It’s time for the Power of Veto ceremony, all of the houseguests gather in the livingroom and Donny announces that he is using the POV to save Jocasta. As the HOH, Derrick has to put another houseguest up for nomination. Without hesitation, Derrick puts Devin up for eviction, along side Caleb.