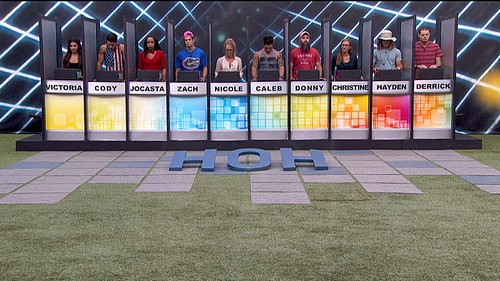 Tonight on CBS BIG BROTHER returns for tall new episode in their 16th season. On tonight’s episode a Nominations for eviction are revealed and the Battle of The Block is held.

On the last episode, Amber was evicted from the Big Brother house and Caleb looked devastated but acted cool and said that this is what happens when you bite the hand that feeds you. Meanwhile, Amber said that she blamed Caleb, she knew it was personal, but she was not going to pretend to be into him just to win a game. The Head of Household competition was held, although in usual BB fashion, they ended the show and we didn’t get to see who the winners were. Did you watch the last episode? If you missed it we have a full and detailed recap, right here for you.

On tonight’s show the we get to find out who the two new heads of households are and see them move into their rooms and nominate two house guests for elimination. If you can’t wait for tonight’s episode and want to find out what is going to go down before the show, check our nifty spoilers here.

RECAP: We continue where we left off in the last show, at the HOH competition and it was a tie so Julie gives them a tie breaking question; Donny and Nicole win.

Zach storms off from the group and pretends that he is pissed that he didn’t win. On the other hand, Jocasta is devastated that she didn’t win but tells Derrick that her faith keeps her strong.

Donny and Nicole are talking game and want to bring Hayden in on the conversation because Donny trusts him. Nicole tells him that she is angry that every time there is a HOH they don’t want to get blood on their hands; it’s time to shake things up, some guys need to go up on the block and see what it feels to be up there.

Zach goes to see Nicole and tells her that she can put him up; she doesn’t know that he is using reverse psychology.

Derrick is talking game with Frankie and are talking that they are upset that Donny didn’t want to carry out the last Team America challenge because it wasn’t good for his game.

Nicole thinks that Frankie is an incredible threat in the house because he plays a very good social game; Derrick agrees with her but he doesn’t want her to put him up because he is good for Derrick’s game.

Time to see the HOH room, Donny is so excited to see a picture of his girlfriend while Caleb is thrilled to see good looking Nicole’s friend Mariah looks in a photo of the two of them. Donny reads his letter from his girlfriend and is really choked up.

Caleb is nervous with Donny being one of the HOH’s because he has put him up in the past, so he sits down with him to have a chat. Donny tells Caleb that if he puts him up, he shouldn’t hold it against him because he did it to him. Caleb asks that if he is put up, please put him up against a good gamer, not Victoria. Donny on the hand, plans to do exactly that.

Donny, Derrick and Frankie are talking game, Derrick really wants Donny to remain as HOH so she doesn’t back door Frankie.

Donny and Nicole are talking, Hayden is there and Nicole suggest they put up Caleb and Victoria; Nicole says it kills her that she is not going to put up Jocasta. Nicole wants to put up strong guys but she knows she can’t put two up because they will come after her. Hayden asks Nicole who she would back door and she says Frankie, Donny tells them that he doesn’t feel comfortable enough to do it, so it would have to be Nicole. Meanwhile, Donny thinks it is a good idea to back door Frankie because he knows that he would put him up in a heart beat.

Zach goes to see Nicole and tells her that it is in her best interest to choose weak players like Victoria because they won’t win the Battle of the Block and Nicole will remain HOH and be able to back door anyone she wants; little does Zach know that she wants to send Frankie packing.

Time for the Nomination Ceremony, Nicole nominates Jocasta and Zach (where did that come from?), Nicole calls Zach a super villain. Time for Donny to nominate his two; Caleb and Victoria.

Derrick tells Nicole that he loved her speech, Frankie tells her she did good. Zach doesn’t care that he was put on the block because he is confident that he has the numbers to stay and when he wins HOH, he is putting up Nicole.

Jocasta goes to see Caleb and tries to strategize with him about what to do in the Battle of the Block competition. Meanwhile, Caleb knows he has no hope because Victoria sucks at competitions.

It the Battle of the Block competition and it is everyone’s childhood fantasy; bears, blocks and more. To win the game the players have to play a game of dominoes. The object is to create a domino chain and knock down at least three domino punishments. Victoria is confident that is going to win because she says that she has the Holy Spirit on her side, really! The most difficult part in this game is the corners and Caleb knows it so that might just give him an edge. Zach and Jocasta give a first try at it and fail. Caleb and Victoria win, Donny is ousted as the HOH. Caleb and Victoria have to do the three punishments; on slop for two weeks, one of them has to shave the other’s head and in the “Adam and Eve” punishment they have to wear fig leaf bathing suits for 48 hours and be chained together.

Nicole is thrilled that she is still HOH and plans to move ahead with her plan in nominating Frankie. Meanwhile, Jocasta is not upset that she lost because she plans on winning the PoV.

SPOILER ALERT – DON’T READ PAST HERE UNLESS YOU WANT TO KNOW!

Update: the Big Brother 16 feeds have provided us spoiler information as follows: Christine won POV but she doesn’t use it! This leaves Zach and Jocasta still on the block and up for elimination!