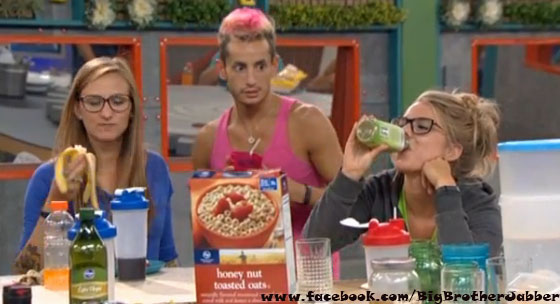 Week 5 of Big Brother 16 came to a close on July 31st when the houseguests voted to send Amber home during the live eviction ceremony. After Amber was evicted, the remaining BB16 players headed to the backyard for the next Head of Household competition. Big Brother 16 spoilers later revealed that the Week 6 HOHs were Donny and Nicole, which means that there could be a major change of power in the house. The Detonators have been picking off the weaker players week by week, and if Donny and Nicole knew what was good for them, they would consider putting some of the stronger players up on the block.

Donny and Nicole stayed up half the night discussing their nominations, and according to the Big Brother spoilers on the live feeds, they have finally held their Week 6 nomination ceremony. Donny put Caleb and Victoria up for eviction, and Nicole nominated Jocasta and Zach. We were really hoping that Nicole or Donny would put up some of the more dangerous players like Derrick or Frankie, but with Caleb and Zach up on the chopping block, this week is still sure to get interesting. We all remember Zach’s major meltdown the last time he was on the block, and nothing ceases to amaze us where Caleb is concerned.

According to the Big Brother spoilers on the live feeds, Caleb is confident that he and Victoria are going to win the Battle of the block competition and save themselves, and he is probably right. Jocasta’s competition track record is unimpressive, and every time she has to compete physically, she gets sick afterwards. So, unless it is a mental competition, Zach and Jocasta are basically doomed.

So, Big Brother fans, what do you think of Nicole and Donny’s nominations? Are you disappointed or do you think they made a smart move nominating Jocasta, Victoria, Zach, and Caleb? Who do you think will win the Battle of the Block competition? Share your predictions in the comments below and don’t forget to check CDL later for all of your BB 16 spoilers and recaps.