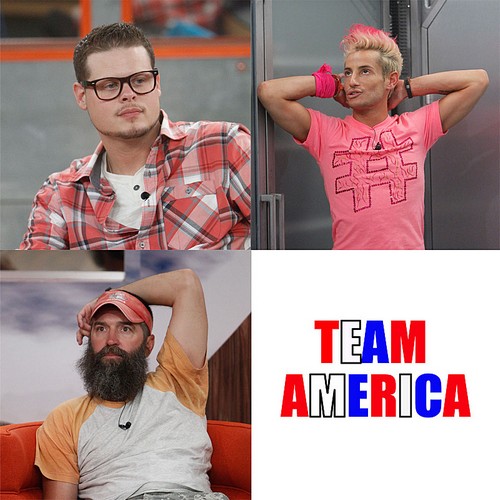 Team America has become an epic fail in most viewers’ eyes on Big Brother 16 and it doesn’t seem as though they can save it. Not only have the Team America members been fractured (Donny is all by himself basically) but now Frankie and Derrick are wanting to vote Donny out. More problems exist and have basically torched the twist from the start. Here are five Big Brother spoilers – ways to improve the “Team America” idea going forward:

Pick Team America during the build up to the show – Big Brother releases constant information in the months leading up to the show. Make Team America based on what the viewers think of the videos they release on the website. Yes, it stinks that they don’t have time or actions to base their picks on. What stinks worse is the contestants not know going in that they will be in a pre-determined alliance. Let the viewers choose and have the team assembled going into the house. This allows them to make decisions from an informed place.

Give Team America some extra powers – If they are going to risk their game, you need to offer up some type of allowance for that. Give them a room where they can sneak off and talk. Give them special insights. If you are going to make them a team to change the game, give them some tools.

Make their game totally different – Put the Team America members in a position to blow up the house. Take them out of the running for the actual money and instead give them a different role in the house. Have them all go in with nothing but keeping the drama rolling as a job. At the end of the season, the Team America that was the best at messing things up gets a huge prize.

Adapt the requests to the current game – It seems that the Team America challenges have been quite random rather than directly aimed at current Big Brother gameplay. Why not do something exact that will have repercussions? For example you might tell Derrick to feign interest in an alliance with Jacosta. That directly would affect what happens going forward. Have them do something fun like steal everyone’s pillows or underwear. Shake it up!

Plant information about Team America in the house – Every so often, some type of clue or hint should randomly show up on the board in the house. Each clue should be a hint about either who is in Team America or what they are planning to do. This added mystery would help the paranoia a great deal among contestants and make even the best alliances a little less solid. That is always a good thing. Let the contestants know going in that three people are going to be in Team America. Get them thinking!