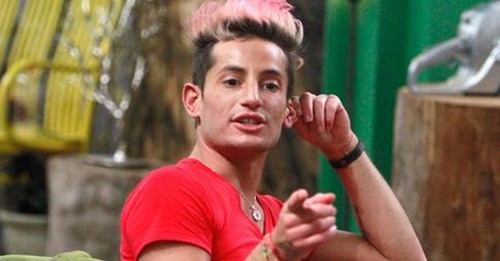 Big Brother 16 spoilers show that Frankie Grande was evicted and for many good reasons, not the least of which was his obnoxious, entitled, diva personality. A spoiler analysis of potential as America’s Favorite Houseguest shows Frankie is a pretty weak position, except if her gets help from fans loyal to his sister, Ariana Grande. What a crazy coincidence that Frankie’s sister Ariana Grande’s diva behavior has taken center stage in entertainment new over the past few weeks. It seems as her music becomes more popular, her behavior becomes worse. But isn’t that the case with Hollywood in general? Le sigh….

Page Six has a long expose-style article on Ariana’s immature and temper-tantrum prone behavior, explaining that she’s always acting like a kid who forgot her toys at home. She apparently makes ‘outrageous’ demands on a regular basis, (reminds us of Franir, no?) and whenever she’s in town, she acts like the President of the United States. Page Six’s source adds, “Everyone is kind of stressed and at the same time, they’re making fun of her because it’s much ado about nothing, really.”

Plus, there’s that whole thing about how people are only allowed to shoot her left side. Um, who does she think she is, Beyonce? Girl, you need to sit your ass down. See, having a ‘preferred’ side isn’t brand new in Hollywood. A lot of celebrities have them – some for cosmetic reasons, and some have straight up reasonable explanations [Tina Fey has a scar on one of her cheeks], but usually their people ask the photographer to POLITELY shoot the star on her preferred side. But with Ariana? Havoc.

The source explains, “With Ariana’s team, it is a demand from the beginning, three people come to make sure before Ariana enters the room. Instead of coming off like an assertive woman who knows what she wants, it makes Ariana seem like a toddler throwing a tantrum and her parents handling the dirty work for her.”

Yeah, throwing a temper tantrum for no reason is the perfect way to describe Ariana Grande. But does this strike anyone as a tad bit familiar? Ariana’s older brother, Frankie Grande, showed similar behavior when he was a contestant on Big Brother Season 16. And clearly, the resemblance – both physical and personality-wise – runs in the family and runs deeo. Both Ariana and Frankie behave like rude and entitled a**holes, to put it lightly. Frankie was one of the worst behaved contestants on Big Brother 16, and what’s worse, he didn’t even try to hide the fact that he’s just plain mean. Thankfully, he was eliminated which says a lot – not even the resident jerks on that show could stand him. That’s how horrible he was!

Basically, Ariana and Frankie are two peas in a pod, which means we need to start looking at what caused this ego-bloating at such a young age. Did their parents blow rainbows and diamonds around their heads from an early age? Seriously, what causes THIS much ego in two kids that are so young, and whose success is still so new? Isn’t it supposed to take years to build that kind of diva behavior? No worries about seeing Frankie as America’s Favorite Houseguest on Big Brother 16 according to our spoilers.