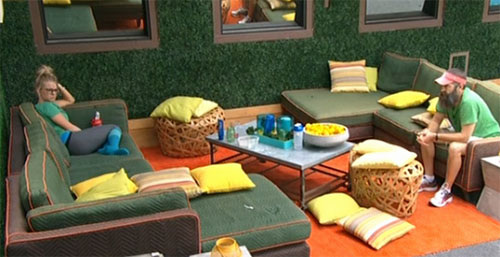 Week 9 of Big Brother 16 kicked off with a bang when evicted houseguest Nicole Franzel returned to the BB16 house. A dark shadow was quickly cast over Nicole’s big return when Cody won the Head of Household competition and Big Brother spoilers revealed he put Nicole back up on the block for eviction, alongside Donny. Nicole and Donny have been walking around with bulls-eyes on their back for weeks and their only hope of staying in the house was winning the Power of Veto.

According to Big Brother 16 spoilers from the CBS live feeds, the houseguests have participated in the Week 9 Power of Veto competition. And the results aren’t good for Nicole or Donny fans. We were really hoping for a miracle and rooting for Donny and Nicole, but according to BB16 spoilers Cody also won the Power of Veto.

BB16 spoilers on the live feeds showed Cody toying with the idea of vetoing one of his own nominations and backdooring Frankie Grande. Cody contemplated putting Frankie up on the eviction block and getting him out the house now; however, his puppet-master, Derrick, ultimately shut down the idea and reminded him this week they are gunning for Donny.

Cody finally called the Power of Veto ceremony; the houseguests gathered around and he announced he would not be using the POV and would be leaving Donny and Nicole up for eviction. (Shocker!)

The Season 16 Big Brother players seem to be the most predictable and uneventful group of players in the history of the reality TV series. According to spoilers on the live feeds, they are planning on voting out Donny, so when the live eviction comes around on

Thursday, August 28th they will most likely send Donny home. The odds of them spicing it up and changing their minds between now and then are slim-to-none. So, BB16 fans, are you surprised Cody left the nominations the same or were you hoping he’d backdoor Frankie or one of the other players? Let us know what you think in the comments below and don’t forget to check CDL for all of your BB 16 spoilers and recaps.