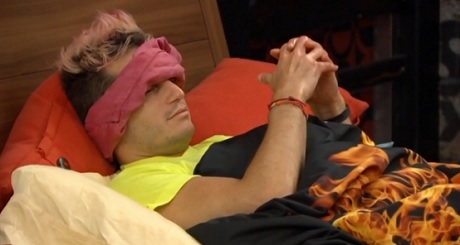 The houseguests recently completed the Power of Veto competition and, according to spoilers acquired via the CBS LIVE feed, Cody won the coveted POV. Everyone in the house competed in the game; however, ultimately, it was Mr. Cody who took home the prize, which he’ll undoubtedly choose not to use. Based on the current rumors and rumblings in the house, it’s looking as if the nominations will remain the same, with Victoria and Frankie on the chopping block. Furthermore, it’s looking like Frankie will be sent packing: not long after the competition, Derrick confirmed to Victoria that she would be safe.

Victoria still looked a tad bit worried, however, despite D’s reassurances. And, while it’s pretty much thought that everyone will be keeping their words during this portion of the game, I suspect — as always — we should expect the unexpected. Frankie is currently experiencing the delusion that he’ll be safe. But . . . it’s not really looking like that. Who knows?

It’s sort of looking like it’s going to be Victoria, Derrick, and Cody in the final three. Caleb will be unable to compete in the next HOH competition and, while this doesn’t necessarily spell his demise, he’ll have to work super hard to win the POV to ensure his safety — because, more likely than not, he’ll be nominated for eviction.

What do you all make of this BB16 gameplay? Honestly, it’s sort of been a predictable season. The houseguests themselves have been *semi* interesting, but I feel as if the house has lacked some of the larger-than-life personalities that have come out of previous, more tumultuous seasons. Thoughts?

Keep checking CDL for all of your new BB16 spoilers!