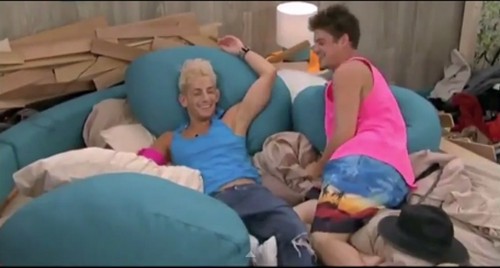 If you have been following the Big Brother 16 live feeds spoilers, then you are well aware that alliances are forming left and right and it is nearly impossible to keep track of them all. However, one Final Two alliance seems to have all the Big Brother fans buzzing. Ariana Grande’s openly gay brother Frankie Grande has been spending all of his free time with Zach. And, the obvious question on every BB16 fan’s mind is…is Zach gay?

We’re not sure what to call Frankie and Zach’s rapidly developing relationship. Is it a showmance? Is it just a super cuddly bromance? Maybe Zach is just so comfortable with his sexuality that he has no problem cuddling with another man and literally laying on top of him in bed in front of millions of viewers. And, if that is the case, then kudos to Zach!

Over the course of the last two days, live feed viewers have watched Frankie and Zach become closer and closer. What originated as just a lot of hugging and back rubbing, has escalated to lying in bed holding each other. I guess the real question is, has Frankie revealed his secret identity to Zach. After all, he is unemployed, perhaps he realized he was shacking up with a sibling of pop royalty and decided to cease the opportunity.

Regardless of whether Frankie and Zach are a bromance or a showmance, they seem to be emerging as a serious force to be reckoned with inside the Big Brother house. What do you think BB16 fans, is Zach gay or just super friendly? Do you think he is snuggling up to Frankie (literally) because he figured out that he is the brother of Ariana Grande? Let us know what you think in the comments below, and don’t forget to check CDL daily for all of your Big Brother 16 spoilers and recaps.