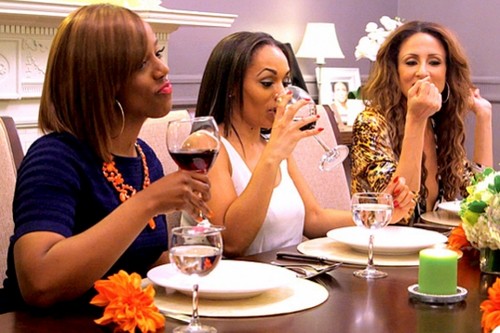 Tonight on Bravo their new reality show BLOOD SWEAT AND HEALS continues with another new episode.  On tonight’s premiere episode called, “Blog is a Four Letter Word,” Melyssa struggles at work, and then at dinner the ladies can’t help but react to Demetria’s scathing blog.  Did you watch last week’s premiere episode?  We did and we recapped it right here for you.

On last week’s show six New York City career women relied on the support of their girlfriends as they climbed to the top — in their stilettos of course. These movers-and-shakers included video vixen turned real estate agent Melyssa Ford, modeling agency owner Mica Hughes, affordable-style expert Daisy Lewellyn, real estate partner Brie Bythewood, “A Belle in Brooklyn” blogger and author Demetria Lucas, and style and pop culture journalist Geneva S. Thomas. When the ladies got together to attend an afternoon soirée hosted by Daisy, a conversation about relationships turned heated, and Demetria took to the web to voice her opinion. Once the other ladies discovered the blog, the repercussions threaten to change these friendships forever.

On tonight’s show Tension heats up between former video-vixen Melyssa Ford and her new boss, which forces Melyssa to question whether she can truly succeed at being a buttoned-up real estate agent. Elsewhere, Daisy’s tardiness sets the tone for a date with a shocking outcome. Then, Mica hosts a dinner party with some of the ladies still reeling from Demetria’s blog betrayal. Unfortunately, “drama” seems to be the only item on the menu.

Tonight’s episode is going to be another drama packed one, which you won’t want to miss. So be sure to tune in for our live coverage of Bravos’ Blood Sweat and Heals Season Episode 2 – tonight at 9PM EST! While you wait for our recap, hit the comments and let us know how excited you are about the new episode of RHOA tonight.

Tonight’s episode of Blood, Sweat, and Heals opens with Melyssa meeting with her business manager Ivan. He has received a bill from a stylist for $1500.00 and he isn’t happy. She hasn’t made any real estate sales, so she isn’t bringing in any income. He wants her to get back into the entertainment business, and she doesn’t want to. She wants people to take her seriously, and if she starts hosting parties again no one is going to.

Geneva is video chatting with her Mom. She is a writer, but her Mom isn’t really happy with her choice of profession. She wishes she had a more stable job with a retirement plan and benefits.

Demetria and Brie are out to lunch, and Brie wants to talk about her blog. She thinks that Demetria threw her under the blog. She wrote an entire post about how delusional it is for women to think that men are leaders and women are not. Demetria admits that she does have some feminist tendencies, and she understands Brie’s point of view.

Melyssa is still at the office, and having some serious difficulties. She forgot the password to her email, and now she is getting scolded by her boss. Jen wants her to show up on time, wear more comfortable shoes, hustle more, and stop trying to make sales and learn the business.

Mica is at her apartment, having some wine with her pet chinchilla Rocky. Melyssa stops by to vent about her real estate job. She had no idea how hard it was going to be to be an agent, and she isn’t making any money. Melyssa says, “there is nothing worse than being well-known, and broke.”

Daisy is out on a date with a man named Jason that she met at a party with Demetria. She is really late, and he isn’t impressed. He even makes fun of her in front of the waitress. Daisy apologizes for being late, but Jason says he doesn’t accept her apology. Jason goes on to tell her that she “doesn’t respect his time.” Daisy tries to make conversation with Jason and tells him about Demetria’s blog, and he just laughs in her face. Jason accidentally dumps his plate of food on the floor, and then goes on a rant about how “selfish” and “self-serving” Daisy is. She chokes up and starts crying. The check comes and Daisy covers it.

It’s the day of Mica’s dinner party, and she has invited her friends to discuss Demetria’s blog. Mica’s personal chef, and close friend, has arrived to start preparing their dinner.

Demetria is home with Greg, getting ready for Mica’s dinner party. Demetria admits that her “friends” are upset with her about her blog. Greg is scared she is walking into a war.

Brie is the first to arrive at Mica’s dinner party. Mica is annoyed because every one else was supposed to be there at 8:00, and they are forty-five minutes late. Melyssa finally arrives, and then Geneva. Mica has been drinking for hours, and she is already getting loud and obnoxious. Geneva is already ranting about Demetria’s blog, and they haven’t even sat down for dinner. Demetria and Daisy finally arrive, and they head into the dining-room for dinner.

The girls sit down for dinner, and Brie wants to say grace. Drunk Mica interrupts her and decides to sing grace instead. Daisy dives right in, and wants to talk about the blog. Demetria wants her to relax and eat her appetizer, they have a whole meal to discuss it. Demetria tells her she is “f—-g annoying.” Brie sticks up for Demetria and tells her if they have an issue to be “ladylike about it” and approach Demetria one on one, not at a dinner party. Geneva is not happy, but Demetria wants her to “calm the melodrama.” Geneva tells her point blank “not to write about her s—t anymore.” Demetria tells her that she can’t promise that. Geneva calls her out. Demetria claims that she has never “snooped” on her boyfriend. A friend of Geneva’s dated one of Demetria’s exes, and Demetria called her snooping about her ex-boyfriend. Demetria slams Geneva’s allegations and calls her a liar, and then she excuses herself from the dinner.

Demetria decides she is done with Daisy, and “she gotta go.” After Demetria leaves Brie tries to point out that they all ganged up on her. Geneva informs Mica she is not allowed to invite Demtria to any of their gatherings anymore. Mica decides it’s a good time for her to get out her feather boa and dance on her dinner table to cheer everyone up.