Bold and the Beautiful Spoilers March 3 – 7: Katie Confesses She Loves Ridge To Brooke – Thorne Has A Dark Secret 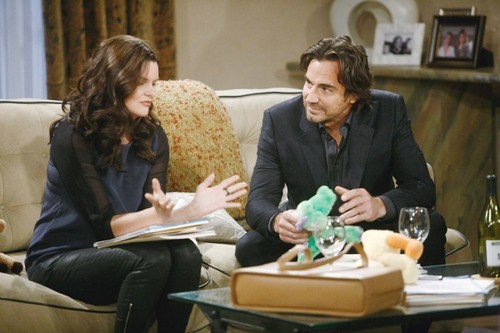 The Bold and the Beautiful fans have been waiting anxiously to see how Brooke, Katie, and Ridge’s love triangle would pan out on the popular daytime soap opera. And, it looks like next week, March 3rd-7th, we may actually find out which one of the sisters Ridge will end up with.

According to Bold and the Beautiful spoilers, Brooke will return home from her Paris trip early, eager to see Ridge and make sure Katie has recovered from her convenient fainting spell. Katie’s guilt will take a toll on her and she will confess to her sister that she and Ridge have feelings for each other. Being the selfish and overly-confident woman that she is, Brooke assumes Katie has gone mad, and there is no way her fiancé could possibly be interested in her sister over her.

Hopefully after Ridge chooses Katie over Brooke, Brooke doesn’t go looking for comfort from Bill. If Quinn has any say in it, Bill will be off the market by next week, March 3rd-7th. Bill’s drunken hook up with Quinn, apparently meant a lot more to Quinn than it did Bill, and he can’t seem to shake her.

Even though Brooke cut her Paris trip early, Wyatt and Hope will stay behind in Paris. Despite Aly’s obvious feelings about Hope and Wyatt’s relationship, they don’t hesitate to hop in bed together. They find themselves in an awkward position, literally, when Ally walks in on them.

Also next week, March 3rd-7th on Bold and the Beautiful, Thorne will enlist the help of an old friend to keep a dark family secret from emerging. Although we still aren’t sure what exactly Thorne’s secret is, it is most likely related to how crazy his daughter Aly is acting, and the appearance of her Mom Darla’s ghost, which is scheduled to occur near the end of March.

What do you think Thorne’s secret is? Share your theories in the comment section below, and check CDL throughout the week for more Bold and the Beautiful spoilers.