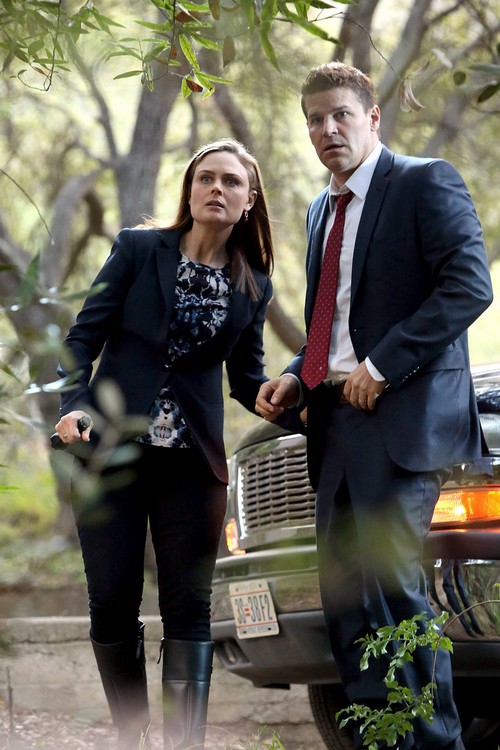 Bones returns tonight with a new episode called, “The Nail in the Coffin.” On tonight’s episode remains in a national park belong to the daughter of the wealthy McNamara family, and the investigation reveals she may have been murdered by the Ghost Killer and had a connection to a previous victim. Meanwhile, the case draws interest from the FBI’s deputy director.

On last week’s episode remains found in a swamp belonged to a woman who was cryogenically frozen before being discarded, which leaded the investigation to a preservation facility. Meanwhile, Cam was nervous about meeting Arastoo’s parents; and Booth was up for a big promotion, but it meant relocating his family.  Did you watch last week’s episode?  We did and we recapped it right here for you.

On tonight’s episode the Jeffersonian team investigates the death of Stephanie McNamara (Kelly Rutherford), the daughter of a wealthy family, whose remains are found in a national park. In case you forgot, Stephanie was in “The Ghost in the Killer,” and though her brother’s death looked like a suicide, Brennan was convinced it was the Ghost Killer. When the team digs deeper into the circumstances surrounding Stephanie’s death, clues from the case lead them to believe she could be yet another victim of the Ghost Killer, with a surprising connection to one of the previous victims.

A body was found out in the forest. A family of campers found it one night after a very spooky session of story-telling. So they were more than just scared when a body literally fell out of the sky and into several of their laps.

Automatically the case has been defined as a possible Ghost-Killer case and so Cam respectively asked that Bones sit this one out. Booth on the other hand wasn’t happy about it and neither was his wife. But Cam is the one in charges of Bones’s department and she rather have Clarke look at the body than Bones.

That way it would have been more objective. Back when Bones was originally on the Ghost-Killer case she became too overly involved and Cam felt that she compromised her sacred objectivity. Yet Bones ignored her superior and attended the crime scene with Booth anyways.

She didn’t find it anything new and Clarke had definitely tripped her up with his own findings – the Ghost-Killer removes the fingernail off one hand. Only this time the victim had all her nails removed and was instead wearing fake human nails. This was possibly due to a condition she had so it still was a mystery whether or not the allusive killer was involved. But the team decided to run with that theory.

And this case will be given the highest priority because of who the victim was. Bones identified the body of Stephanie McNamara. She recognized the common traits Stephanie had with her late brother Trey.

Trey was attributed to the Ghost- killer, but no one can understand why his sister was also targeted. Booth thought that maybe she was digging into her brother’s death and she was made an example of. And he could be right. He and Bones found evidence of a struggle at Stephanie’s home.

Cuff marks prove she was dragged out of the stables and in the same stables they were signs of someone clawing at the walls.

Cam ran the DNA and it was Stephanie clawing at the walls, but the incident happened at least 15 years ago. Since then the victim’s nails were never able to grow back naturally. And as for the human nails she was wearing – they each belonged to a victim of the Ghost-Killer. They were even a nail from Stephanie’s brother attached.

The reason Stephanie had these nails glued on was because she was the Ghost-Killer all along and she wore those nails to relive her kills. However someone else killed her thereby doing the world a favor.

Stephanie McNamara was the only connection between all the victims. She was always there around the time of their deaths and according to the family’s gardener; she was also severely abused as a child. Her father used to lock her in whenever he felt the need to punish her and Stephanie destroyed her nails by trying to claw her way out. It ruined any chance of her having nails and so she started taking them off of her victims.

There was an extra nails though on her finger. It didn’t match with any of the victims they had on file.

The nail matched a closed case from 20 years ago. The victim was a teenager and was once a close friend of Stephanie. Her name was Maya and she was killed the same way Stephanie was. So naturally suspicion fell on the person that went to jail for Maya’s murder.

He was the girls’ biology teacher and after serving a 20 years sentence – he’s been recently released.

Stephanie’s father covered up the murder and made all the evidence point towards the teacher and away from his family. But he didn’t do all of this purely for his daughter. Mr. McNamara had raped Maya and Stephanie was jealous he had showed someone else “affection”. So she killed her friend and daddy covered it up.

He even had his powerful friends help him to cover it up. The ME changes his paperwork, the judge gave the teacher a near life long sentence, and there must have been someone on the FBI also on the payroll. Now the teacher that’s been waiting patiently for justice for two decades is killing them off.

He got Stephanie and he got his former judge, but there still one person out there. Only problem is the teacher didn’t know who he was and so he was ending his short killing spree.

Bones and Booth found him before he could kill himself although he didn’t know who was the third man involved. So there’s one person still out there responsible for letting Stephanie kill 9 people.

But it’s doubtable if Booth will ever figure out who it was. He’s been given the promotion outright and for now that’s ok.