Bones Recap Spoilers “The Geek in the Guck”: Season 10 Episode 4 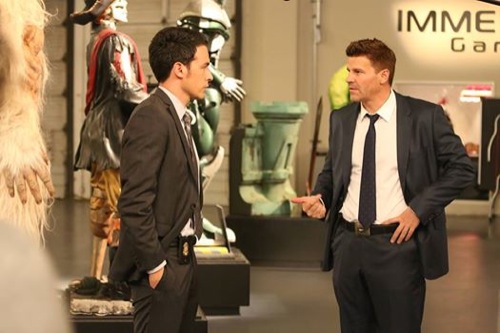 Tonight on FOX Bones returns with an all new Thursday October 16, season 10 episode 4 called, “The Geek in the Guck.” On tonight’s episode the investigation of the murder of a video-game designer reveals the wealth he accumulated during his career, which makes a suspect out of everyone who was in his inner circle. Meanwhile, “squintern” Jessica sheds light on an educational opportunity; and Brennan [Emily Deschanel] and Booth [David Boreanaz] discuss Christine’s future.

On the last episode, with the help of “squintern” Rodolfo Fuentes (guest star Ignacio Serricchio), the Jeffersonian team investigated the murder of a controversial conservative radio host whose remains were found in a storm drain. When the team discovered some of his extracurricular activities, they came across shocking evidence that narrowed down the suspects. Meanwhile, Special Agent James Aubrey (guest star John Boyd) was desperate to gain the trust of Booth, and Brennan was worried about Booth’s psychological well-being after recent events. Did you watch the last episode? If you missed it, we have a full and detailed recap right here for you.

On tonight’s episode the Jeffersonian team, with the help Special Agent James Aubrey (guest star John Boyd), investigate the murder of a video game designer whose remains were found washed up in a river. When the team uncovers more about the fortune the victim had acquired throughout his career, everyone who was close to him becomes a suspect. However, the investigation takes a turn when they discover that the victim was playing his own games on people. Meanwhile, “squintern” Jessica Warren (guest star Spencer) enlightens the team about the educational cooperative with which she has been involved and Brennan and Booth discuss Christine’s future.

Tune in at 8PM EST on FOX to watch season 10 episode 4 of BONES. We’ll also be updating fans right here as the show airs so be sure to check back in with us. Brennan and Booth have had a long television run. Do you like that their characters mix up business with home life? Hit up the comments and tell us your thoughts about their tangled relationship!

It’s time for Little Christine to officially start attending school. She’s grown up so fast and already she’s taking after her mother. Meaning, she can sometimes be difficult. Smart but difficult! Her mother actually had to explain, scientifically that is, why it was important she eat breakfast. And Christine accepted all the talk about needing Vitamin B, C, and D! So she does have promise – educationally speaking.

Hence, her mother wanted to find the perfect school for her and Booth just wanted to drop her off at the school down the street. He doesn’t think Kindergarten should be that big of a deal. And thankfully most of their arguments end up getting interrupted by work so she was pulled away before the Kindergarten issue turned into something much bigger.

However Bones’s newest intern had put certain thoughts in her head. They were working on a corpse found by the river and Jessica (that’s her name) had begun to talk about her life back home. She was raised in an education cooperative. Basically, it’s a commune with a nicer name and better credentials. And while Bones originally doubted such an upbringing could be helpful – she changed her mind when she heard about the other kids that Jessica grew up with. A Pulitzer Prize winner and two Roadside Scholars tend to sound pretty impressive to a woman that’s really worried about where her daughter will one day be going to school.

The body they were looking turned out to be a murder victim so Booth and Agent Aubrey were called in to investigate the death. Although, later, Angela found out finding the killer might be harder than everyone thought. Their victim was a well-known video game designer. He lived humbly but he was in fact wealthy.

Also he was in charge of a multi-million dollar contract deal. A deal someone else could have gotten their hands on if he was suddenly removed from the picture.

Then Jessica found something in the bones. She notices the victim had suffered injuries similar to a fighting technique he had instilled in one of his games. Booth and Aubrey followed up on her lead and that meant the reenactor but he admitted right off the bat he beat up Robertson. The only strange thing about their incident is that Robertson didn’t fire him afterwards.

The guy saw Robertson will an expensive bracelet and because of that he wasn’t fired. And when you assault your boss – that’s not generally how things end!

So the bracelet had to be important. And while Robertson was smart – he left behind enough crumbs for the squids to find out what he was really doing. Robertson was secretly catfishing his best friend. The friend Noah hadn’t left their house in years and so he never had a chance to meet his online girlfriend.
But he did send this girlfriend Chloe a bracelet. Yet when the feds tracked down this woman, her real name was Alice and she had never heard about Noah much less talked to him online.

Remember, Robertson was a control freak. And he created a fake girl so that his friend wouldn’t move out. Though he stepped on someone’s toes when he created a girl named Chloe. Chloe had broken up Noah and his then girlfriend. The very same girlfriend that Noah was getting serious about and wanted to move in with.

Hence his friend created a fake person in order to break them up and when the ex found out Robertson had been playing with her feelings like she was another character in his games – she killed him.

In the end, Noah met Alice in person and the two managed to hit it off so there was a silver lining to case. And Bones later decided (thanks in most part to Jessica showing her unconventional ways can be just as fruitful) to let Booth choose Christine’s school. She’s going to let him use his gut on this one.