Bones “The Corpse at the Convention” Recap: Season 10 Episode 4 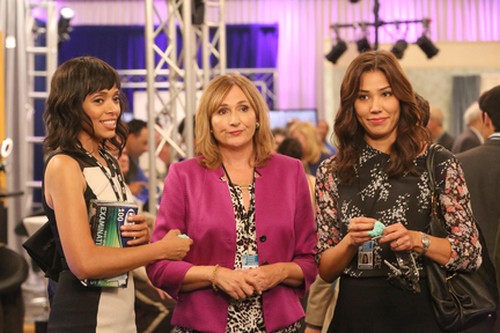 Tonight on FOX Bones returns with an all new Thursday October 30, season 10 episode 4 called, “The Corpse at the Convention.” On tonight’s episode Brennan gives a keynote speech at a convention for forensic scientists, who are all eager to help when the remains of a body are discovered in a stairwell, but the Jeffersonian team are stunned when Hodgins becomes a murder suspect. Meanwhile, Brennan has an encounter with a rival; and Wendell returns to work with an update on his health.

On the last episode, with the help of “squintern” Rodolfo Fuentes (guest star Ignacio Serricchio), the Jeffersonian team investigated the murder of a controversial conservative radio host whose remains were found in a storm drain. When the team discovered some of his extracurricular activities, they come across shocking evidence that narrowed down the suspects. Meanwhile, Special Agent James Aubrey (guest star John Boyd) was desperate to gain the trust of Booth, and Brennan was worried about Booth’s psychological well-being after recent events. Did you watch the last episode? If you missed it, we have a full and detailed recap right here for you.

On tonight’s episode the Jeffersonian team attends a forensic science convention with Brennan delivering the keynote speech, only to discover the remains of a body in a stairwell at the convention. With numerous convention attendees offering help and their products, evidence points to Dr. Hodgins as a suspect and the team has to find a way to prove his innocence. Meanwhile, Brennan runs into her publishing rival, Tess Brown (guest star Nora Dunn) and “squintern” Wendell Bray (guest start Michael Grant Terry) has news about his cancer diagnosis and returns to work with Jeffersonian team.

Tune in at 8PM EST on FOX to watch season 10 episode 4 of BONES. We’ll also be updating fans right here as the show airs so be sure to check back in with us. Brennan and Booth have had a long television run. Do you like that their characters mix up business with home life? Hit up the comments and tell us your thoughts about their tangled relationship!

On tonight’s episode of Bones, the Jeffersonian team were given a little surprise when they went to a convention held every year in honor of forensic sciences. This year they attended in full force because it was supposed to be extra special seeing as their very own Bones was chosen to be the convention’s keynote speaker.
However she was never even given a chance to get to her jokes. And though those jokes would have ultimately have fallen flat in the room – sitting down to hear Bones give an awkward speech would have been far preferable to what they ended up having to do.

Someone was murdered at the convention and now the team including the returning squintern Wendell (he’s been doing well in remission) are on the case. Sounds simple but at a convention held for Forensic sciences and their doctors there is nothing that can be called simple with these people. Everyone wants to give an opinion and they all want in on the case.

Apparently, “pushy” comes with the job and there’s just too many chefs in one kitchen! So police were actually used to rope off the area. Just so no one would tried to get their hands on any of the evidence or attempt to solve the murder themselves!

As for the victim, Dr. Leona Saunders, she wasn’t an innocent bystander and according to Hodge there’s plenty of people both at the convention and in the world that would have wanted her dead. And Booth can also add Hodge into that equation because Leona had stolen a multi-million dollar idea from him back in the day. Hodge has hated ever since and it hadn’t looked seemly for the good doctor to have been seen fighting with Leon moments before death.

Some would say he’s prime suspect material. But Booth did try to give him the benefit of the doubt. He and the new kid went and looked for other suspects yet no one looked as guilty as Hodge. Then when Hodge’s DNA was found at the scene – the guys no longer had a choice in the matter. They had to take Hodge in for questioning.

He came in and gave plausible answers. And that ended up being enough for Booth. He’s still not over his own ordeal of being falsely accused so he let his longtime friend slide himself right out of the limelight.

And as for the case, the team kept looking and what they found was Leona’s last meal. She had eaten strawberries with chocolate and chased it down with very expensive bottle of wine which any man even a dunce one would tell you she probably didn’t have alone.  The contents of her stomach meant she was having a romantic interlude with someone and so after tracking down who ordered those items off of the hotel menu – they were pointed towards the Director of the convention.

But he claims to have loved Leona. He said he wanted to spend the rest of his life with her and in case anyone was wondering he said he wasn’t the jealous type. Although he does know who was. Before he had started dating Leona, the doctor was once involved with the author Tess Brown. He used to date and help her work on her book. Then he called everything off after he met Leona.

Though, regardless of no one actually liking Tess as a person, they’re really wasn’t any evidence against her. And Bones soon realized their killer was by far smarter than Tess. Tess wouldn’t have thought up the simple geniusness of killing Leona.

At first he sold the Jeffersonian his useful gadgets that would have made crime solving easier but the team found out one of them was in fact destroying evidence all the while appearing as if it was helping. So really the killer got himself caught. He couldn’t resist showing off.

And though he will continue to sell his products to the Jeffersonian – he now has to do it from a prison cell. But hey at least Bones got to give her speech in the end!