Bones LIVE Recap “The Purging of the Pundit”: Season 10 Episode 3 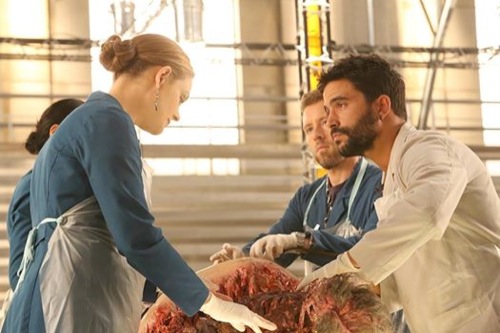 Tonight on FOX Bones returns with an all new Thursday October 9, season 10 episode 3 called, “The Purging of the Pundit.” On tonight’s episode the remains of a right-wing radio host are found in a storm drain, and the investigation reveals some surprising extracurricular activities that narrows the search for suspects. Meanwhile, Agent Aubrey tries to get Booth [Special Agent Seeley Booth] to trust him, and Brennan [Emily Deschanel] worries about her husband’s state of mind.

On the last episode, the Jeffersonian team, with the help Special Agent James Aubrey (guest star John Boyd), continued to investigate who was behind a conspiracy within the Federal Government that dates all the way back to J. Edgar Hoover. Then, when foreign DNA was found in a previous victim linked to the scandal, the team as able to narrow down the number of suspects, leading them closer to cracking the case. Did you watch the last episode? If you missed it, we have a full and detailed recap right here for you.

On tonight’s episode with the help of “squintern” Rodolfo Fuentes (guest star Ignacio Serricchio), the Jeffersonian team investigates the murder of a controversial conservative radio host whose remains were found in a storm drain. When the team discovers some of his extracurricular activities, they come across shocking evidence that narrows down the suspects. Meanwhile, Special Agent James Aubrey (guest star John Boyd) is desperate to gain the trust of Booth, and Brennan is worried about Booth’s psychological well-being after recent events.

Tune in at 8PM EST on FOX to watch season 10 episode 3 of BONES. We’ll also be updating fans right here as the show airs so be sure to check back in with us. Brennan and Booth have had a long television run. Do you like that their characters mix up business with home life? Hit up the comments and tell us your thoughts about their tangled relationship! While you wait for the recap, check out a sneak peek of tonight’s episode below!

Life, by all appearances, seems to be returning to normal in spite of recent events. There’s a new body hence an investigation.

However Bones is concerned about Booth’s behavior. She feels like he’s avoiding dealing with what happened to him and she doesn’t want that to crossover into their work life. It might lead to dire consequences.

Since his false imprisonment, Booth isn’t exactly all that trusting towards the people he works with. Except for the squints, he suspects everyone now of working against him and that includes all federal agents. And that’s not helping him build a bond with his new partner. Partners are otherwise known as the guys that could potential save his life one day.

But this new case they have is interesting and Aubrey desperately wants a more active role. And so Booth ended up allowing Aubrey to follow him around. Their victim was a notorious Shock Jock. Hutch was so conservative – he was basically anti-everything. Immigration, Women, Gun Control were just some of the well-known topics he touched on. So not only was Hutch notorious but he received more than 200 threatening letters a day.

Aubrey had offered to help go through the letters and yet he was turned down. Booth wanted to look at the evidence himself and once he was done he then made Aubrey act a messenger to deliver the letter to the Jeffersonian. Although Booth primary suspect isn’t who he would think!

For one, the suspect is not a liberal. He’s actually a conservative who thought the shock jock that once implied starving out the immigrants was too lenient.

Later it was revealed the suspect was in the middle of making a homemade bomb when Booth and Bones busted in on him. Though it’s important to note that again Booth decided not to utilize Aubrey. He just went out to investigate a possibly dangerous suspect with only his wife as backup.

Fortunately the crazed white supremacist wasn’t as dangerous at least with hand to hand combat as he was with bombs. He was simply crazy and he was in fact not their killer. No, their suspect at first showed signs of being tortured and then when that angle was closely investigated – torture was ruled out and S&M was ruled in.
Hutch loved visiting a dominatrix. It was a way to punish himself for all the things he said over the radio. Consequently, Hutch was in truth a moderate and saying those things he did made him feel like he needed help. And with the dominatrix’s own form of therapy – Hutch realized he needed to quit his job which would have cost his producer to lose a lot of money.

That made Booth look at the producer and he found out Bob had only moved the body. Though He wasn’t the one that killed his star. He had merely come in and seen Hutch in full S&M gear and he didn’t want the man to be found that way. The scandal alone would ended up costing him millions in sponsors.

The real killer as Angela came to find out was Hutch’s partner on the radio. If Hutch left the station then partner wouldn’t have a thing afterwards. So he planned on blackmailing Hutch with a few risqué photos of someone done up in their dungeon gear. A fight ensued and the rest was an accident.

But at the end of the day, the most important things is Booth finally relied on the new guy. He had his wife pressuring him and she gotten so desperate she was even passing on advice she had gotten from the lothario at the lab. So Booth listened and he chose to trust in Sweets’s last bit of counsel.
It was time to move on!