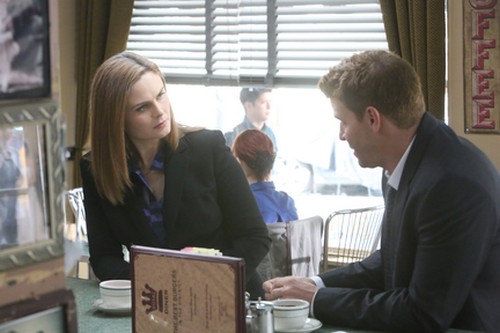 Tonight on FOX Bones returns with an all new Thursday November 13, season 10 episode 7 called, “The Money Maker on the Merry-Go-Round.” On tonight’s new episode a hedge-fund trader’s remains are found under a merry-go-round, and the victim’s boss emerges as the prime suspect, but Aubrey is troubled by an emotional connection to the case. Meanwhile, Christine curses for the first time, and Brennan [Emily Deschanel and Booth [David Boreanaz] don’t agree on what to do about it.

On the last episode, the Jeffersonian team investigated the murder of an immigrant maid whose remains were found on the side of the road. The victim’s wealthy former employer, Sandra Zins (guest star Phyllis Logan), was a key suspect in the case, but when the team discovered that the victim might have been brought into the country illegally, the team realized the case was much bigger than it seemed. Amidst talks of marriage between Cam and “squintern” Arastoo, tensions rose between Brennan and Cam as Arastoo prepared his dissertation for Brennan’s approval. Did you watch the last episode? If you missed it, we have a full and detailed recap right here for you.

On tonight’s episode as per the FOX synopsis, “after severely damaged human remains are discovered under a merry-go-round, the Jeffersonian team begins a complicated investigation of a billion dollar hedge fund company. When the victim’s boss (guest star Gill Bellows) becomes a prime suspect in the investigation, the case takes a major turn as the team uncovers incriminating evidence against the victim. Meanwhile, the investigation becomes increasingly difficult as Aubrey feels an emotional connection to the case, and Booth and Brennan are at odds when Christine curses for the first time.”

Tune in at 8PM EST on FOX to watch season 10 episode 7 of BONES. We’ll also be updating fans right here as the show airs so be sure to check back in with us. Brennan and Booth have had a long television run. Do you like that their characters mix up business with home life? Hit up the comments and tell us your thoughts about their tangled relationship!

It was revealed on tonight’s episode of Bones that little Christine has learned to curse. And because she has parents that seemingly fight over everything, Bones and Booth disagree about whether or not their daughter should be allowed to curse. Now, Booth has always been about doing what was right but with a wife like Bones and a daughter that’s inherited her stubbornness – he’s going to have an uphill battle on his hands convincing either of them why it’s wrong for Christine to curse!

Booth is a tough position but he’s not going to be the worst father in the world if Christine continues cursing.

You see while Booth was trying to figure out what was right, there was a body found at the Dad playground. That particular playground is where divorced dads took their kids on their weekends. And as for the body, it was found buried underneath the merry-go-round. Everyone came upon it after the ride had become stuck and the dads had used their combined strength to get it working again. However their efforts revealed a rotting corpse and after their kids who all saw a dead body return home to their mothers – dad’s weekends might be shorter than they were before.

The victim’s name was Toby. And apparently without him, his wife is a total basket case. It seems she never learned how to manage her own check book so once she was informed about her widowhood – she quickly started to freak out and thought about how her husband’s death was going to affect her lifestyle.

Toby was a hedge fund guy. Meaning he kept his wife swimming in wealth even as he was losing millions for his clients at his firm. Speaking of those millions he lost – his firm, frighteningly enough, doesn’t appear to be angry about it. His boss said that just last year Toby had brought in half a billion so a few measly millions didn’t seem to mean anything. At least to the firm as a whole.

But, neither the clients nor even Toby’s fellow traders are going to mourn his passing. Toby has screwed a lot of people over during his meteoric rise. And that’s why this case is serving as an awful reminder to newbie Aubrey.

Aubrey’s father used to own his own investment firm. Though that was about to chance after his father was caught committing fraud by willfully stealing from his clients. Then, just as the older man was going to be indicted on charges; he fled the country. Thus leaving his family to face the music without him.

So Aubrey and his mom were left broke and most of their “friends” had fled when the going got tough. Their reputation was in tatters and the man that was responsible wasn’t around to serve his time – it was unfair but eventually life went on. And Aubrey thought he had finally dealt with the demons of his past. Then this case happened and Aubrey was shaken by it.

Plus it doesn’t help that from the loos of it, Toby appears to be equally as selfish as Aubrey’s dad. He used people’s money as a plaything and he didn’t exactly treat his wife as anything other than an ornament. The investigation revealed Toby went elsewhere for pleasure. And that includes paying for it.
Toby’s widow had heard from the grapevine that her husband had been cheating on her so she asked Booth and Aubrey if it was true and Aubrey told her she was better off. He didn’t really mean it (to be cruel to the widow that is) but his own past had made him say it. And afterwards he felt so guilty about crossing the line.

So Aubrey thought it was best to remove himself from the case after his little slip up in case another one were to happen. He told Booth to take Bones with him while he did something useful. Like file the proper paper work.

And it was Bones and Booth that brought in Toby’s boss. Even though Aubrey was the first to suspect him. However they were all wrong about the boss. Sure, Toby was revealed to be stealing from him but that doesn’t mean the boss knew about it.

Rich guys tend not notice when a few grand go missing. So it wasn’t Toby’s boss behind his murder. No, the culprit ended up being someone that just happened to walk in on Toby in the act. And it was kind of poor luck that guy also happened to be someone who hates Toby.

He came, he witnessed, and then he went overboard in trying to teach Toby a lesson about stealing people’s money!

As for Christine’s cursing problem, Booth it seem was right. Once Christine got “permission” she started to call everyone Jackass including her mom and her teacher. So Bones agreed with Booth that maybe they should set down parameters for their daughter.