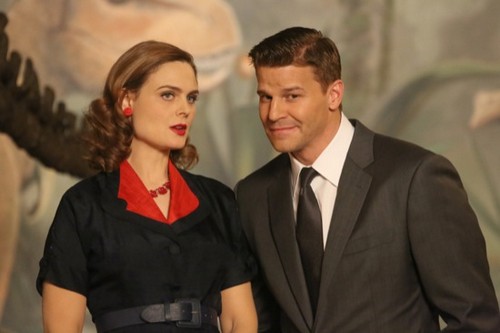 Tonight on FOX Bones returns with an all new Thursday December 11, mid-season finale season 10 episode 10 called, “The 200th in the 10th,” and we have your recap below. On tonight’s episode the show’s 200th episode is an homage to Alfred Hitchcock’s films that takes place in 1950s Hollywood, where LAPD detective Brennan teams up with jewel thief Booth when the latter is framed for the murder of a wealthy socialite. Directed by series star David Boreanaz.

On the last episode, when the Jeffersonian team investigated the remains of a college psychology professor, the victim’s controversial social experiments on his grad students garners a list of highly motivated suspects. Meanwhile, Booth was sidelined with online traffic school, causing Brennan to team up with Aubrey, and Wendell struggles with his feelings towards a chemotherapy treatment nurse. Did you watch the last episode? If you missed it, we have a full and detailed mid-season finale recap right here for you.

On tonight’s episode as per the FOX synopsis, “BONES pays homage to Alfred Hitchcock in an episode that reimagines the Jeffersonian and FBI teams in 1950s Hollywood. Brennan plays an LAPD detective who’s battling sexism on the force, and Booth is a notorious jewel thief who is far more than he seems to be. When Booth is framed for the murder of a rich socialite, he and Brennan team up to clear his name and find the true identity of the murderer.”

Tune in at 8PM EST on FOX to watch season 10 episode 10 of BONES. We’ll also be updating fans right here as the show airs so be sure to check back in with us. Brennan and Booth have had a long television run. Do you like that their characters mix up business with home life? Hit up the comments and tell us your thoughts about their tangled relationship!

We’re in for a treat with tonight’s 200th episode of “Bones”. Rather than see our everyday lovable characters in their usual setting – tonight’s special is going to be done 1950s Alfred Hitchcock style. So please don’t be surprised if you hear the word “jinxy”.

Booth is no longer the dashing hero we’ve all come to love. In the special, he’s actually a notorious cat burglar. And he appears to be quite good at his job. So well in fact that Bones, who is still working for the good guys, has been on his tail for a while now yet she’s never been able to catch him in the deed. That is until one fateful night our jewel thief ended up robbing the wrong sort of house.

Booth, as a thief, tends to head straight for the jewels. So it’s completely understandable why he didn’t see the victim. If anything he would have done his best to hide when he heard someone approaching. But, still, there was a dead body found at the scene. A rich socialite named Eva. And naturally Booth is the chief suspect for her murder.

Though Bones doesn’t believe he did it. Like what was said before, she’s been studying him and she’s knows murder isn’t part of his MO. So she tried to tell her boss at the police station to keep looking for other possible murderers. However her father felt he had cut her enough slack as it is. Women don’t generally become police officers during their time and her dad had bent the rules to give Bones a fair chance at the proving the naysayers wrong.

Then Bones trampled that trust when she went after Booth without back up.

Bones knew she wouldn’t get the back up even if she had asked but that doesn’t seem to matter to her father. He’s named Booth as the murderer and he’s hired on a new detective to come and tie everything up for him.

So Bones knew she had to get some real back up for a change. She found Booth at one of his many hiding places and she asked him to assist her in finding the real killer. And seeing as he has a large stake in the matter – Booth made a deal with her.

They were going to investigate together. And they were going to accept help from wherever they could get it. They had Angela, one of the secretaries at the LAPD, and her trusted sidekick Wendell, a reporter, to look in on the jewels that were deemed to be a lure.

And they got a paleontologist by the name of Hodgins and his assistant Eddison to look at the victim’s bones as if it was dinosaur’s bones. That way they would be able to determine the cause of death.

Using this new procedure, the doctor and his assistant realized the explosion was not Eva’s cause of death. She was stuffed into her safe with the dynamite. But the reality of her situation is that someone had bashed her head in first prior to the explosion.

As for the illustrious jewels, Eva no longer had ownership over them. She had sold them after having a bit of financial difficulty. And, really, so the jewels couldn’t be the reason she was murdered. Though her lack of money might have been what worked against her.

Before she died, Eva used to like to collect a certain type of man. She would find the young charming sort and she would bankroll them during their time together. Eva did that with Aubrey and she even did that with a married man she had met on a boat.

Yet neither of these men had a reason to kill her. Honestly, Aubrey had quickly moved on to another woman to sponge off of.

Though later Booth ended up needing Aubrey’s help in identifying the victim’s remains. Because the person who they thought was Eva was actually not Eva. Hodge and Eddison said the victim was too tall and had bigger feet. So using Angela’s skills as an artist – they made sketch of what their victim would have looked like. And Booth was about find out who she was when Aubrey was killed before he could name her.

Booth was the suspected for the murder of Aubrey but he knew he couldn’t make a run for it. Not with so many people depending on him.

So he stuck around and he even brought Eva’s other lover in for questioning. Booth and Bones needed to know who the mystery woman was. However the lover didn’t know she was. So Bones changed up her questions. Instead of asking him about the mystery woman – they asked him to describe Eva. And his description matched Eva’s maid.

Cam, the maid, had tried to rob her employer and when Eva had found confronted her when she out about it. Hence Cam had no other choice but to kill Eva. And, well, blaming Booth was just convenient.

Booth and Bones got to Eva’s house before Cam could run. But Cam got the best of them. She was quicker with her gun and she was even willing to take Bones hostage to keep Booth in line. Though Booth didn’t let that stop him from following her to a private airstrip. Where this former soldier was able to heave himself onto a plane that was already several feet off the ground.

Booth took down Cam’s partner and Cam’s partner greed is what destroyed her in the end. When her bag ill-gotten gains was about to fly out of the plane – she reached for them even though it meant her death. So, ultimately, Booth and Bones survived their ordeal.

And in the end Bones finally received recognition as a cop. Then to celebrate, she and Booth gave into their feelings that were there all along.