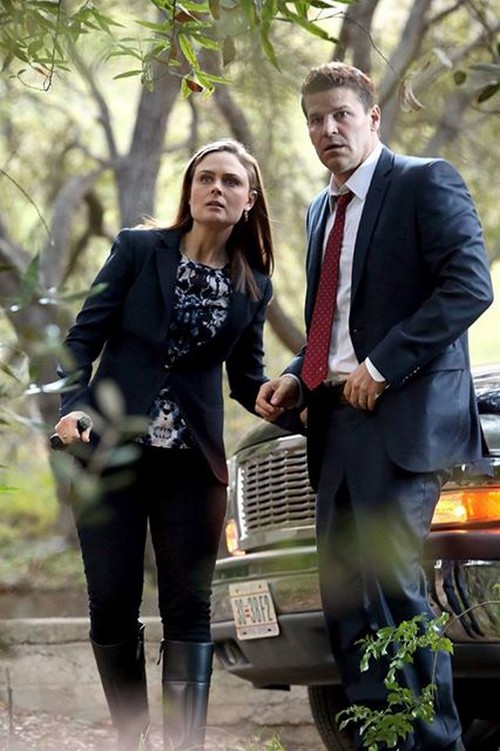 Tonight on FOX Bones returns with an all new Thursday December 4, season 10 episode 9 called, “The Mutilation of the Master Manipulator,” and we have a recap for you. On tonight’s episode the investigation of the murder of a college psychology professor reveals some controversial social experiments on his grad students, which lead to a long list of suspects. Meanwhile, Booth [David Boreanaz] is shackled by online traffic school; and Wendell deals with his feelings about a nurse who’s involved with his chemotherapy treatments.

On the last episode, after a famous crossword puzzle master was found in an urban fracking site, the Jeffersonian team investigated puzzle champ’s fellow players in order to track down the killer. After discovering that the victim was suffering from a mental illness when he died, the team realized the case was much more complicated than it seemed. Meanwhile, a very pregnant Daisy (guest star Carla Gallo) looked for comfort from her doula, Valentina (guest star Mindy Cohn), and the newest member of the Jeffersonian family arrived. Did you watch the last episode? If you missed it, we have a full and detailed recap right here for you.

On tonight’s episode as per the FOX synopsis, “when the Jeffersonian team investigates the remains of a college psychology professor, the victim’s controversial social experiments on his grad students garners a list of highly motivated suspects. Meanwhile, Booth is sidelined with online traffic school, causing Brennan to team up with Aubrey, and Wendell struggles with his feelings towards a chemotherapy treatment nurse.”

Tune in at 8PM EST on FOX to watch season 10 episode 9 of BONES. We’ll also be updating fans right here as the show airs so be sure to check back in with us. Brennan and Booth have had a long television run. Do you like that their characters mix up business with home life? Hit up the comments and tell us your thoughts about their tangled relationship!

On tonight’s episode, the Jeffersonian team had a tough identifying their victim with what little remains they had in their possession.

Unfortunately, their culprit(s) had deliberately set out to complicate matters by dismembering and dumping several pieces of the victim all throughout the city. So while on one hand the team has solved a case with much less – it turns out they still had to go hunting through garbage bids when they found out the remains were conveniently damaged by rats.

The damage to the remains was so extensive, squintern Wendell couldn’t even decipher what happened post-mortem. Hence he felt a tad guilty about having to leave the rest of the team to work on the case. Wendell had wanted to stick around to help but he was close to finishing his chemotherapy. And truthfully, he wanted to see the nurse that’s been treating him just one more time. It seems he’s developed something of a crush and it wasn’t until the very last day of treatment that she started dropping hints that maybe the interest wasn’t completely one-sided.

Yet the team managed to do just fine without Wendell. They eventually identified their victim as Randall Fairbanks. He was a prestigious professor. And the reason his college didn’t file a missing person’s reports is because he had taken a sabbatical several weeks ago.

Though, some of Fairbanks probably didn’t miss him. It was later revealed that the good professor had done several controversial social experiments on his grad students. According to his assistant, they were researching the blind obedience. The professor would bring in students who were then told they had to question and possibly punish fellow students.

The experiment worked like this: Two partners were given a Q& A. One had to administer and the other had to answer. These two people never saw each other but they did in fact hear each other. And if the latter failed to answer the question correctly then the former had to push a button that would send an intense shock wave into someone they had, technically, only recently met.

Often the administrator would continue to push the button, never questioning the experimenting, even as the shock waves became more intense after each failed question. So in essence it was a sick experiment and it ended up having far-reaching consequences. One of the administrators had actually kept pushing the button until the intensity of the shock grew so much it could have honestly have killed someone. That same student had go on to admit to the professor that the other man had awoken a monster inside of him. Because, really, none of the students used in the experiment were told the truth about it until afterwards.

There was never any shock waves and the second student was a complete fabrication created by the professor and his assistant. So no one was harmed during the experiment but the lab project showed several kids that were capable of killing someone.

One student had to check himself in at the psyche ward when he realized what he had come so close to doing.

Though it would be surprising is, in spite of his experiment, Fairbanks was murdered over something so petty like dumping a woman nearly two years ago. Apparently, Fairbanks had been dating one of his grad students and Aubrey found out that same student had just moved back into town.

Aubrey has been the lead on this case while Booth was stuck at the office completing his online traffic school class but neither Booth nor Bones had that much faith in Aubrey. At least in the beginning. However he soon began to win their respect when he refused to take sides during one of their many arguments.

But, he was wrong about the jealous ex. Aubrey was focusing all on of his energy on Victoria who Fairbanks had dumped a couple of years ago. And as he was doing that, the team found evidence of Tabitha (Fairbanks latest grad assistant/girlfriend) being at the crime scene prior to Fairbanks’s death.

Tabitha had helped Fairbanks on all of his latest research papers yet she was never even acknowledged. It was like Fairbanks had dismissed her entirely. So Tabitha did have a reason to hate her boyfriend but she too was innocent of killing him.

Fairbanks was, funnily enough, killed by his sweet old neighbor. The elderly woman next door had tried to poison Fairbanks’s cat when the feline kept trying to eat the precious birds that would come to her bird house. And well one thing led to another, Fairbanks fell back on an old statue he had out in his garden and had impaled himself.
As for the neighbor, she just did the clean-up.
And Wendell, he was scared about starting a new relationship with him being so fresh out of remission but his new girlfriend seems like she can handle him and all of his fears.