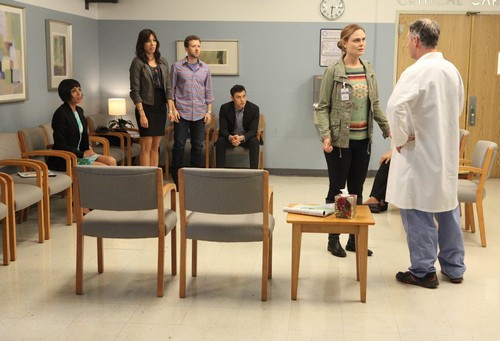 Bones returns tonight with the finale called, “The Recluse in the Recliner.” On tonight’s episode in the Season 9 finale, a conspiracy blogger’s death arouses suspicion when he dies before a scheduled meeting with Booth to discuss a previous case, but evidence uncovered during the team’s investigation could affect his future with the FBI. Directed by series regular David Boreanaz.

On last week’s episode the Jeffersonian team investigated the death of Stephanie McNamara (Kelly Rutherford), the daughter of a wealthy family, whose remains were found in a national park. In case you forgot, Stephanie was in “The Ghost in the Killer,” and though her brother’s death looked like a suicide, Brennan was convinced it was the Ghost Killer. When the team dug deeper into the circumstances surrounding Stephanie’s death, clues from the case lead them to believe she could be yet another victim of the Ghost Killer, with a surprising connection to one of the previous victims.  Did you watch last week’s episode?  If you missed it, we have you covered with a full and detailed recap, right here for you.

On tonight’s episode In the season finale of BONES, the Jeffersonian team investigates the death of Wesley Foster, a conspiracy blog writer who had arranged to meet up with Booth to discuss a previous case before his untimely death. Realizing that whoever killed Foster did not want him talking to Booth, the team has to try to figure out who is behind the death and how the previous case is relevant. As Booth and the Jeffersonian team dig deeper into the burgeoning conspiracy surrounding the man’s death, it’s evident Booth may be in over his head, and his future with the FBI is put in question

Tune in at 8PM EST on FOX to watch the season 9 finale episode of BONES. We’ll also be updating fans right here as the show airs so be sure to check back in with us. Brennan and Booth have had a long television run. Do you like that their characters mix up business with home life? Hit up the comments and tell us your thoughts about their tangled relationship!

The Season finale of Bones opened up with a frantic Bones harassing the hospital staff that’s trying to keep her away from Booth’s. He appeared to be shot and though Bones wants to help – she can’t interfere with the people trying to save her husband’s life.

What happened to Booth and why does it somehow involve the McNamara?

Two days before the incident, a blogger managed to get a hold of his unlisted number. The mystery man wanted a meeting and had even used his alleged information on the McNamara to bait Booth into seeing him. But they never got the chance to talk about the Ghost Killer and co. Primarily because, by time Booth arrived to meet this man; his blogger was already dead.

At first glance it looked like an accident. Just another smoker that fell asleep without putting out his cigarette. Yet after the Jeffersonian team got their hands on the body; they soon realized that this seemingly insignificant blogger was murdered.

His name was Foster and he used to be respected journalist. However after his life began to fall apart – his work disintegrated into conspiracy theories… or so the world assumed. Foster took up blogging to give voice to these sometimes outrageous ideas, but along the way, this blogger fell onto some rather great information and was going to share it with Booth when someone killed him.

This has cover-up written all over it (at least according to Hodge) and Booth is taking the necessary precaution of not informing any of his superiors about what’s going on with the case. Sweets wasn’t comfortable with withholding from their bosses and only agreed to go along with it because he trusts Booth. If Booth has a hunch then it would best to simply go with it.

And as they continue to dig into what Foster found – they realize how dangerous it could be if they did drag the FBI into this. Recently Foster took on a job as a janitor at one of the McNamara’s companies and what he found was the motherlode.

Seeing as it was a murder investigation both Sweets and Booth thought they could gain aces to whatever Foster found on the security computers. But oddly enough Caroline couldn’t get a subpoena on the company. She was blocked by the use of “national security”.

Luckily though Foster had backed up what he found. He saved it on what looked like a nipple ring and what turned out to be a memory key. Even Angela was shocked by what she found on the key. Foster found proof of someone inside of the FBI masterminding one of the biggest blackmailing rings ever seen. This man used corporate leaders and politicians to do his bidding. And it goes so high up that he was able to use Delta Force agents to kill Foster.

They found signs of torture on their blogger. It was similar to what Bones had seen in Iraq so she knew their victim was killed by a certain type of professional.

Because of the severity of the case, Booth asked his friends to do the rest of the investigation in secret. He didn’t want to put them in harm’s way and thought if they officially signed off Foster’s death as an accident then the blackmailer wouldn’t set their eyes on them.

But it was much too late for Booth personally. The blackmailer had him in his crosshairs the moment he started to look into McNamaras. And that’s why he stated to take down Booth by offering him that dream job in Germany. It was just a little too good to be true!

In order to get the job, Booth had to sit down for a congressional hearing. He thought it would be a quick Q & A and what it turned into was a hatchet job. The congressman that was supposed to be on his side abruptly turned against him in open court. Congressman Hadley brought up Booth’s top secret assignments in the Middle East and basically referred to him as an assassin in front of broadcasted television.

Booth and Bones had to push themselves out of a crowd of reporters just to escape that “hearing”. And it came as a surprise to no one that Booth’s bosses (despite being the ones to give him those orders overseas) were willing to sacrifice him for the sake of PR. They put him on leave, but Booth knew what that meant.

Someone had gotten to the congressman and the team knows how they were able to do it. There was picture of him kissing another man that could in no way be mistaken as his wife inside of Foster’s files. So Booth confronted him for breaking under pressure.

Hadley explained that this thing, whatever it is, was too high up and that he couldn’t help Booth. Booth probably wanted to write that off as a poor excuse, but he quickly realized how very right the congressman is. He got information that a Delta Force team was heading his way and in order to protect his family – he sent them away.

Bones didn’t like that though she knew it would be best for their daughter if one of them managed to get away in time.

On her way to a safe house, Bones got word from back at the office that they had info that could hopefully prove useful to Booth. They noticed how the killers took down Foster and were able to give Bones the Delta Force’s weak points.

She returned home right when the shooting was going down and due to her interference – Booth was able to kill all three agents before either of them was seriously harmed. Bones then had to rush him to the hospital to treat his wounds and after a long night – it seemed like Booth was going to make it. But unfortunately his recovery is going to have to be from a prison cell. The FBI arrested him by claiming that the agents he killed were FBI sent to bring him into custody.

And back at the Jeffersonian, they were hacked. Someone attempted to steal all of their files and the only reason they didn’t was because Angela had installed a failsafe after Pilant!