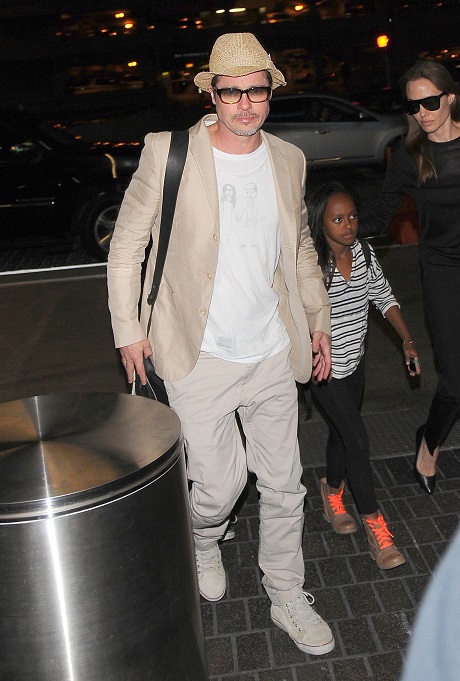 Brad Pitt and Angelina Jolie are masters at playing the media game, so they’ll never, ever be obvious about what they’re trying to tell the public. For example, Brad was spotted with T-shirt sporting a doodle of a bride and groom while leaving LAX the other day, accompanied by two of his children, Zahara and Maddox. Subliminal messaging, perhaps?

Brad and Angelina have been engaged for quite a while now, and when asked about their wedding in interviews, both of them continue to say that they don’t have anything planned in the near future. But then, why is Brad sporting a T-shirt of a bride and groom? Sure, you could argue that his children made him that T-shirt and he’s fond of it. I’m thinking the more likely possibility is that he knew he was going to be photographed at LAX [come on, he can avoid the paparazzi when he really wants to], and he knew people would notice his T-shirt.

So is he trying to send us a message saying that he and Angelina are getting married soon? Or that they’re not getting married at all? Considering that the couple got engaged in 2012, you have to wonder what the holdup is. Fine, they’ve been very busy the last year, but they both have some time opening up before Angelina’s Oscar campaign for Unbroken begins. But when they keep saying they have no plans to get married soon, you can’t help but get an inkling that there’s something wrong.

For what it’s worth, I doubt Angelina and Brad will ever break up. However, sources close to the couple have said that marriage is not on their list of priorities. But in that case, Brad should probably think twice about wearing a wedding t-shirt next time, right?

What do you guys think? Are we seeing the beginning of a Branglina breakup or a Brangelina wedding? Let us know your thoughts in the comments below.