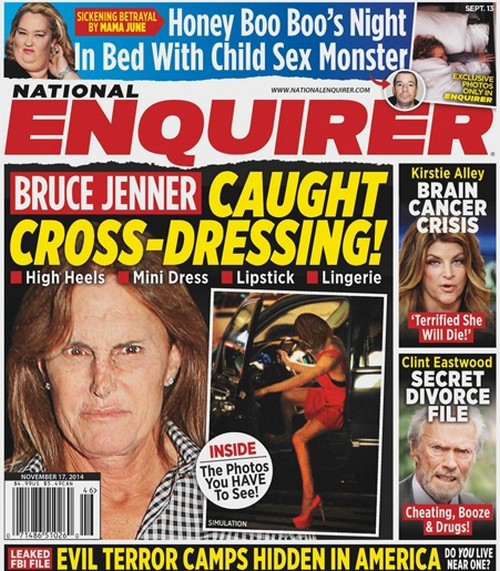 In mysterious world of Bruce Jenner’s sex change news and rumors it seems Uncle Bruce was caught crossing and wearing lipstick and high heels. Why is this not hard to believe? Bruce Jenner has more or less completed the superficial aspects of turning into a women, so no one can say that Bruce Jenner’s sex change was half-assed. However, the latest cover story from The National Enquirer suggests that Bruce has now taken it one step further and is actually cross-dressing in full view of the public. Damn, divorcing Kris Jenner really did wonders for his confidence, didn’t it?

The picture on the Enquirer’s cover appears to be Bruce, although that’s no guarantee that it really is him. What the report suggests is that Bruce Jenner has taken to wearing mini-dresses, high heels, lipstick, and lingerie – otherwise known as cross-dressing. But with all the procedures he’s gotten done in the past year, cross-dressing only comes as a natural step forward, right? After all, Bruce Jenner’s allegedly gotten his Adam’s apple shaved down, his body hair removed, his hair cut in a feminine manner, and his features significantly feminized. After all that, of course he was going to start wearing a dress, makeup, and heels. Why not?

The Enquirer’s source also adds, “Even his own sons believe their dad is transitioning. Brandon and Brody know their dad is struggling with who he really is.” Well, seeing him cross-dressing ought to put their mind at ease, at least in regards to Bruce’s intentions.

There’s also another report on the Enquirer’s cover featuring Clint Eastwood’s divorce, which seems to be a never-ending saga. Apparently, there’s a ‘secret divorce file’ revealing that he was involved in having an affair, doing drugs, and drinking too much – so basically, tell us something we don’t know. Clint Eastwood’s love triangle with his ex-wife and lover was well publicized a few months ago, and I’m actually in admiration that an 84-year-old man can have such an active sex life. Good for him, I guess?