Californication RECAP 5/11/14: Season 7 Episode 5 “Getting the Poison Out” 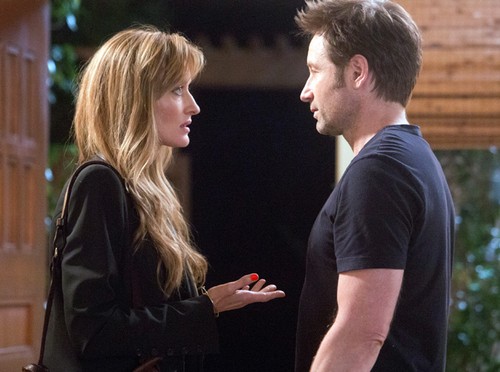 Tonight on Showtime Season 7 of CALIFORNICATION airs with its fifth episode called, “Getting the Poison Out.” On this evening’s episode, Levon enjoys a night with Nikki, while Karen, Hank and Marcy are forced to endure the company of Nikki’s creepy friend. Meanwhile, Charlie gets in over his head with a new client.

On last week’s episode Levon hoped for some alone time with Melanie but three’s a crowd with The Director in the way. Money troubles added to Charlie and Marcy’s marital unrest, but new client Goldie may put Charlie back in the black. Hank, Levon and Julia celebrated Julia’s new role.  Did you watch last week’s episode?  If you missed it we have a full and detailed recap, right here for you.

On tonight’s episode while Julia is off with Rath, Hank and Levon have a night out with Karen and Marcy. But as Levon has the best night of his life with Nikki, the rest of the gang are forced to endure the company of Nikki’s creepy friend. Charlie may have gotten in over his head with his new client Goldie.

While Levon has the night of his life with Nikki, Hank, Karen and Marcy are forced to endure the company of Nikki’s creepy friend. Charlie may have gotten in over his head with his new client Goldie.

Rath tells Hank he is going on date with Julia. Hank assures him he is okay with it. He tells Levon about the date as well to gain his approval and Levon shares that he already knows about it. Levon goes on to tell Rath how his mom shares everything with him and the conversation gets a little creepy when Rath starts to rethink the date. Levon reassures him and he decides to give it a shot.

While Marcy gives a waxing job at home, Stewart comes in the room and the situation gets uncomfortable. After he leaves, Marcy asks how she heard about her services and her client shares that Stu told her all about her and actually talks nonstop about her. Stu also got in a few digs about Marcy’s current hubby, Charlie.

Hank and Levon hang out at a bar and talk women. Hank tried to give Levon some tips on dealing with women. When Levon tries to pick up on a woman, she actually knows Hank. She was a former acting student. Hank tries to push her towards Levon, but his conversation skills are lacking. The woman goes on to share all the information she recalls from her former class about all the women that Hank was sleeping with. Levon high fives Hank.

Charlie visits Goldie, his new client. She called to ask him over and asks for help getting her off the show. She demands that as her new manager, he needs to be there for her to help her. She tells him how she hates Rath. She is indulging in wine and chocolate and tells Charlie her idea is to have him killed. Charlie tries to talk her off the ledge and she yells that he should at least call him and rip him a new one. Charlie agrees.

When Hank tells Marcy how he wishes he could help get Levon laid, she mentions that her client from earlier is an escort and can probably help. The woman later comes and gets excited at first to see Hank, hoping he is the client. As Marcy and the woman are talking with Hank, Karen walks in. Hank scoots them away and talks to Karen, hoping she is not going to ask for details. When Karen wonders what is going on, Hank tells Karen that the woman is visiting as a waxing client. As soon as Levon comes down, the woman and her pimp begin discussing business because they have to hurry and finish so they can move on to the next client. Levon is shocked, Karen is pissed, and Marcy is in trouble. Levon then thanks Hank but Karen interrupts and tells Levon his mom would not approve. Karen tries to talk Levon out of going forward, but he is pretty excited about the chance. Karen continues to persuade him not to use a prostitute for the first time. Levon then asks if Karen wants to sleep with him. She is disgusted and Levon says he made up his mind and wants to take the gift hos dad got for him.

Goldie is getting a ride to Charlie as she is very drunk. She begins getting obnoxious iin the car and is very demanding about what she expects from him. When he wonders how he will get home if they drive her car home, she tells him she could care less. She is very drunk and goes from yelling at Charlie to hugging him. While hugging him, she gets sick and vomits right in his lap.

Marcy, Karen, Hank, and the pimp wait for Levon and the prostitute to finish. They are all sharing experiences and talking when Karen gets up to leave. She is pissed at Hank and disappointed in him. They are interrupted during their talk by the hooker. She explains that when she told him to undress her he was getting so nervous he almost fainted. He asks Hank for help in calming down and wonders if he is having a heart attack. When he wonders what to do, the women just undresses and Levon tells Hank to leave. Charlie comes home with wet pants from his night with Goldie. Levon is very excited afterwards and he comes to sit with Hank and share how he’s feeling. Levon thanks Hank for the best night of his life.