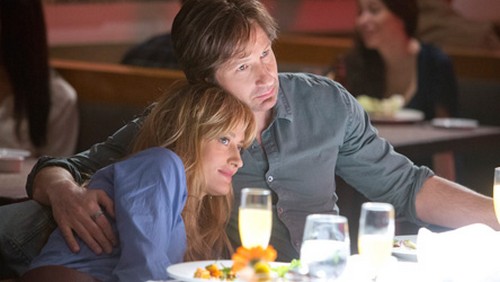 Tonight on Showtime Season 7 of CALIFORNICATION airs with its ninth episode called, “Faith, Hope, Love.”  On this evening’s episode, Hank recalls turbulent times with Karen, a confused Becca, and their days with a happier Charlie and Marcy. Meanwhile, a nun helps Hank put things into perspective.

On last week’s episode Hank encountered problems with Hashtag Black on his episode of ‘Santa Monica Cop.’ The Director, however, made him get things back on track. Julia proved to be a distraction. Levon got a big opportunity. And news of Stu’s offer lead to fisticuffs.  Did you watch last week’s episode?  If you missed it we have a full and detailed recap, right here for you.

On tonight’s episode Hank flashes back to his turbulent times with Karen and a confused young Becca – and their days with a happier Charlie and Marcy. A run-in with a nun, however, helps him to put things into perspective.

Tonight’s episode begins with Hank arriving at the hospital after getting Marci’s call telling him that Karen was in a car accident. When he arrives, Marci tells him that she was hit by a drunk driver, she is in and out of consciousness, and could use some blood. Charlie is there and woozy at the thought of giving blood, but he ends up next to Hank as a nurse draws their blood. Hank begins to reminisce about old times with Karen and asks his friends if he’s always been an a-hole. He laments about not having cherished her when he had her because she’s the best thing in his life.

He recalls a counseling session the two attended years earlier after learning that Karen formed an emotional bond with another man. Hank was furious at the time and couldn’t take any responsibility for his part in her needing to look elsewhere for someone who listens to her and takes her needs into consideration. In the meeting Hank punches a wall, and just then is brought back to present day as he punches a vending machine after his frustration over Karen being in the hospital begins to show.

Just as he goes to call Becca, he is reminded of a special moment they spent together when she was very young. Just the two of them talking as they walked together. Meanwhile Marci tries to convince Charlie that they need to get over feeling bad about getting aroused about Stan’s offer to pay for sex with Marci. Marci explains her reasoning by telling Charlie that people are all wired to get aroused by something and they need to just get over it and stop worrying so much. Hank comes back and sits with them. Just then he sees a doctor talking to a man he spoke to at the vending machine. The doctor obviously delivered bad news as Hank sees the man become upset after speaking to the doctor. It hits home for him as he fears the same conversation.

He begins to recall an argument he had with Karen that resulted in them almost getting in a car accident. They end up kissing in the end of his daydream, and that is enough to send him to the chapel at the hospital. He is greeted by a very attractive female chaplain who talks with him briefly, shows some empathy, and then encourages him to pray. As he closes his eyes in prayer, he thinks about Karen again; this time after a night of passion as they lay in bed talking. Shortly after he is back to reality and in the waiting room again, the doctor comes with an update.

Karen has a concussion, but no internal bleeding. She will be okay, but must remain for a couple days. The doctor says one person can go back. He asks if Hank is the husband. Marci yells “YES” and Hank heads to see Karen. She seems to be asleep, so he kisses her forehead. She wakes up and tells him that “this” (referring to her accident) doesn’t change anything because she is still pissed at him. He replies that he wouldn’t have it any other way. As he looks Karen in the eye, he reminisces about a dinner date with best friends Marci and Charlie. It was a very happy night for the four of them, just as it will be now for the four as they are reassured that Karen is going to be okay.

So will Hank make some changes to his life, or will he be right back to normal? Meet us here next week to find out whether or not Karen’s accident changed his outlook enough to change himself.