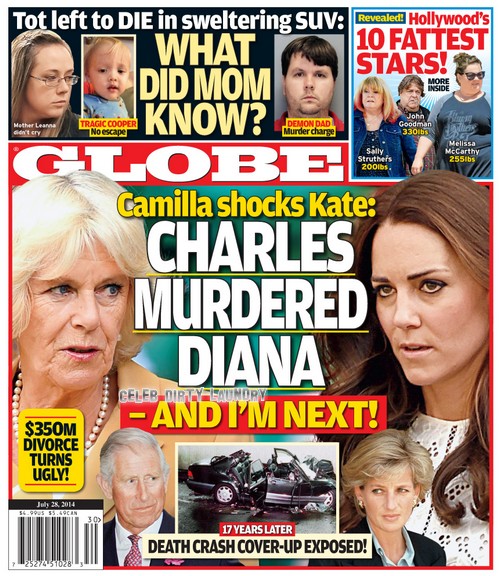 Princess Diana‘s death has been enshrouded with mystery over the past decade, but the conspiracy theories have ranged from her murder at the hands of her husband to a plot by rival governments. And the latest cover of the Globe suggests that Diana’s death can be traced to Prince Charles.

According to the GLOBE’s July 28th print edition report, Camilla Parker-Bowles has turned to Kate Middleton in her fear, telling her that Charles is responsible for Diana’s death. It’s been seventeen years since that fateful car crash that took Diana’s life, but what if the crash wasn’t an accident? Could Charles have been behind the murder of his own wife? Considering their often tumultuous relationship, we know there was no love lost between husband and wife, even after they separated. And we know royals have not shied away from from brutally murdering people, as evidenced by the British Monarchy’s long and sordid history.

Not only that, but Camilla is reportedly worried that she’s next, which is why she’s telling Kate her version of the truth. Perhaps Charles tired of her, or perhaps there’s a reason that she’s ‘next’. Maybe he doesn’t want anyone by his side when he ascends  the throne, or maybe he’s worried that she’ll steal the spotlight. Even worse he might fear that she will reveal inside information that could be damaging. Either way, Camilla’s pinched look of worry during all her public appearances might finally have an explanation.

The GLOBE also has a feature on Hollywood’s fattest stars, although that phenomenon is certainly decreasing as celebrities face more and more pressure to keep their bodies in camera-ready shape.

The sad story of tragic Cooper left to die by his irresponsible father in a hot car is exposed in detail in this week’s GLOBE.

What do you guys think of this week’s shocking GLOBE cover? GLOBE pulls no punches and lays it right out there for its readers. The Palace will no doubt be fuming when they see this week’s copy but there are many who are convinced that the Royal Family was behind Princess Diana’s tragic death. I can barely wait to read the details of what Camilla told Kate and you can be sure I’ll be reporting back to CDL readers on this amazing issue later in the week.