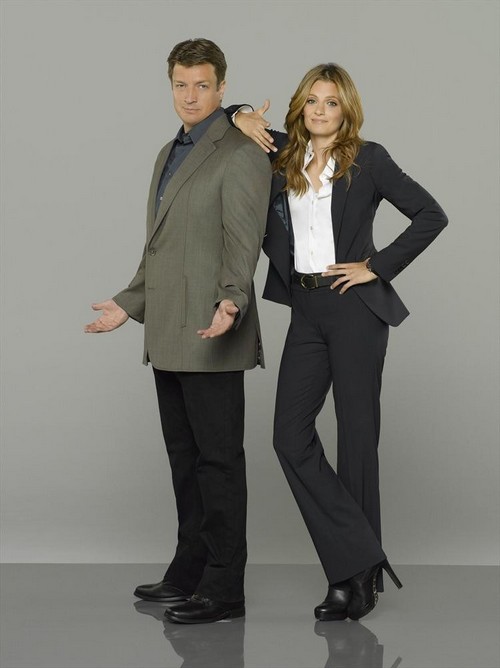 Tonight on ABC their hit crime drama CASTLE returns with the new episode called “Smells Like Teen Spirit.”  On tonight’s show Castle & Beckett investigate the death of a young girl who appears to have been killed with telekenisis.  Did you watch the last week’s season 6 episode 13? We did and if you want to get caught up, we have a full and detailed recap, right here for you.

On last week’s episode when the assistant to Modern Fashion Magazine’s dictatorial editor Matilda King (guest star Frances Fisher) was found murdered, Castle and Beckett was thrust into the glitzy, ruthless world of high fashion in their search for the killer. Meanwhile Beckett’s history in the modelling world got her access to a very special wedding surprise.

On tonight’s episode the murder of a high school mean girl draws Castle back to one of his many alma maters, where he is giddy to learn that the evidence points to a surprising perpetrator – a teenage telekinetic, throwing he and Beckett into a real-life “Carrie.”  Guest Cast: Sam Anderson as Principal Duncan, Malese Jow as Hillary Cooper, and Hannah Marks as Jordan Gibbs.

Tonight’s episode is going to be great and you won’t want to miss it. So be sure to tune in for our live coverage of ABC’s Castle tonight at 10 PM EST! While you wait for our recap, hit the comments and let us know what your think of Castle season 6, so far?

Tonight’s episode of Castle opens with two teen girls in a car, they receive a video call from their friend Madison. While Madison is video chatting with them, something attacks her from behind and throws her in the air.

Castle and Beckett receive a phone call for a murder. They arrive at Madison’s house, and realize there is blood on the ceiling. Somehow the murderer managed to throw Madison in the air and bounce her off the ceiling.

Espo is at the station interviewing Madison’s parents. Madison’s parents have no idea who would have wanted to hurt her, but they think they should talk to her ex boyfriend Riley. He is really big and strong (maybe could have thrown her at the ceiling) and is not happy that she dumped him.

Castle and Beckett head to Riley’s school to question him about Madison’s ex Riley. He says that he had nothing to do with her death, but he broke up with her a month ago because she wasn’t behind herself and sneaking out all hours of the night.

Castle and Beckett head to the Principal’s office to see what happened in the cafeteria. The Principal shows them a video that a student captured on a cell phone in the cafeteria. Madison and her friends were bullying a girl named Jordan. Jordan got angry and somehow managed to slam all of the chairs and tables in the cafeteria against the wall … with her mind. Castle is excited, he thinks they have a “real life Carrie on their hands.”

Beckett is convinced that it is a hoax, even the Principal thinks that Jordan really has magic powers. Castle thinks that Jordan used her telekinesis powers to kill Madison. They want to question Jordan, but it turns out she snuck out of school when she found out that the police were there questioning people about Madison’s murder.

Jordan is on the run, even her guardian doesn’t know where she is. They search her bedroom and they find books about telekinesis and a creepy picture of Madison with her eyes scratched out. Jordan’s guardian says Jordan only has one friend, and is name is Lucas.

Castle and Beckett track down Jordan’s friend Lucas, he is busy painting props for the dance. Lucas wasn’t in the cafeteria when Jordan used her mind to slam all of the tables and chairs into the walls, but he doesn’t think the rumors are true.

Espo pulled Jordan’s phone records, and realized the called a strange number as soon as she left school, a business called “Henderson’s” Castle and Beckett track down the bizarre phone number, and walk in on a man floating in the air. The man introduces himself as a Doctor and says he studies biophysics. He says that Jordan came in last week to be evaluated, but he can’t share the results. The Doctor says that Jordan was scared that she couldn’t control her powers. Beckett threatens to arrest the Doctor, and Jordan comes out of hiding and turns herself over to Beckett and Castle.

They bring Jordan back to the police station and question her about Madison’s murder. Jordan confesses that she wished Madison would die, because she tormented her every day after Jordan bumped into her in the library. Jordan has an alibi though, she was at a café with witnesses when Madison was murdered.

Espo ran Madison’s financials and found out that she had over twelve credit cards and a secret bank account her parents didn’t know existed. According to her credit card purchases she was staying out until 5:00 AM and then heading to school without going to sleep every morning.

Castle and Beckett head to the library where Jordan saw Madison, they find the book Madison was reading. It’s an old Russian version of War and Peace, and Madison is the only one that has been reading it. Beckett picks up the book and realizes all of the pages have been hollowed out, and the book is full of German Bank Bonds, over a million dollars’ worth of bank notes.

Espo shows Madison’s parents all of her credit card charges and her bank account summary. Her parents were completely clueless about her credit cards and bank account, and they thought Madison went to bed every night at 11:00 PM. Espo reveals that Madison had a stash of 2.3 million dollars in bank bonds, and her dad Charles begins acting suspicious. He says he “can’t help them” and rushes out of the police station.

Castle and Beckett head home, and argue about what song is going to be “their song.” Castle has printed out a list of Billboard’s Most Romantic Songs, but Beckett refuses to choose “their song” from a list that has Def Leopard’s “Pour Some Sugar On Me.”

The next day they head to the police station and Espo reveals that they found an antique ring in the back of the bookshelf next to the bank bonds. They traced it to a burglary a few weeks ago, and linked that to a string of burglaries in the area. Madison was staying out all hours of the night, and robbing families in her neighborhood, then pawning the items she stole and depositing the money in her secret bank accounts.

Recently a man named Chen stole 2.3 million dollar’s worth of Bank Bonds from a bank. Chen was arrested, and his lawyer was Madison’s dad Charles. Madison must have heard her Dad discussing the stolen bank bonds and where Chen had stashed them, and she robbed the bank robber.

Beckett and her team try to track down Chen, who clearly had motive to murder Madison, but he sold his house and left town. They sit down with his realtor and she reveals that Chen was superstitious, and a ghost chased him out of the house, so he sold it. A witness seen the furniture being thrown around inside the house.

Turns out Chen wasn’t Madison’s killer, he was on a plane back to China when she was murdered.

Castle and Beckett think that Jordan may have worked with Madison, Jordan used her telekinetic powers to create a disturbance in Chen’s house, when he ran out Madison stole the bank bonds. They review the video of Jordan using her powers to move the tables in the cafeteria and realize that her friend Lucas lied to them, he was actually in the cafeteria when the video was made. And, the paint that Lucas was using on the dance props, was found at Chen’s house.

They bring Lucas in for questioning, and he confesses that he rigged the whole telekinetic event in the cafeteria with fishing line. He doesn’t have magical powers, and neither does Jordan. Madison realized that Lucas had faked the whole thing, and blackmailed him into creating another fake scene at Chen’s house. Lucas also helped her create the video that looked like someone was murdering her with Telekinesis, to scare her friends.

Castle and Beckett realize that the video that Kris and Hillary say they saw, was old. They used it as an alibi. They head to the dance and find stolen property from the robberies in Kris and Hillary’s lockers. Kris and Hillary were part of Madison’s “Bling Ring.” Kris confesses to murdering Madison and smearing her blood on the ceiling to make it look like she died on the Telekinetic video because she was sick of “Madison’s psycho games.”

After Hillary and Kris are hauled off to jail, Castle and Beckett head to the high-school dance together.