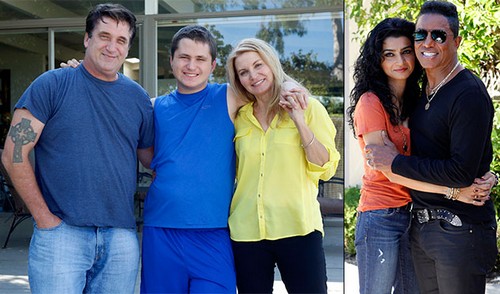 Tonight on ABC Celebrity Wife Swap returns again for a whole new episode. On tonight’s show two Hollywood dynasties come together for the first time when the partners of actor Daniel Baldwin and music legend Jermaine Jackson swap lives for one week.

Daniel Baldwin’s former girlfriend, Isabella Hofmann, lives in the Hollywood Hills with their autistic son Atticus (17). After struggling for a decade with drug addiction, Daniel is now sober and working on rebuilding his relationship with both Isabella and Atticus.  Meanwhile, in Calabasas, CA, music legend Jermaine Jackson and his wife, Halima, live a privileged life with their prized show dog, Fiji.

These families may be considered Hollywood royalty, but that is where their similarities end.   At the Baldwin/Hofmann home, Isabella is solely responsible for the day-to-day running of her home, while Halima does not worry about cooking and cleaning and domestic responsibilities. When Isabella arrives at the Jackson home, she is blown away by the glitz and glamour as well as the racks and racks of clothing, endless pairs of shoes and infinite bottles of cologne.

Meanwhile, Halima experiences a surprise of her own when she sees her swap home’s modest size, compared to her own grand estate. Throughout the week, each of the women experience what it’s like to live in each other’s shoes:  including managing hectic schedules, scrubbing their own pots and pans and even cleaning up after messy, indulgent dinners. When the time comes, the two women gladly welcome the rules change, but not everyone else is so willing. In the end, one side of the swap is left in an awkward and uncomfortable situation when the celebrity husband holds firm and resists any change.

We will be covering tonight’s Celebrity Wife Swap,  Daniel Baldwin and Jermaine Jackson episode with all the details.  You don’t want to miss this episode, you never know what craziness is going to break out!  Don’t forget to come back to this spot at 8PM for our coverage of the episode.

On tonight’s episode of Celebrity Wife Swap, Michael’s brother Jermaine Jackson will be appearing with his wife Halima Rashid. Halima and Jermaine have been married for nine years and live together in a gated community. Halima has her work cut out for her caring for Jermaine because he is a shopaholic and a germ chobic.

Actors Daniel Baldwin and Isabella Hoffman are the other celebrity couple appearing on Celebrity Wife Swap tonight. Daniel and Isabelle have one son, 17 year old Atticus, who has been diagnosed with Autism.

It’s time for the wife swap. Halima and Isabella pack their bags and say good-bye to their families. They arrive at their new homes and have a few minutes to snoop around the houses. Halima thinks Isabella’s house is ridiculously small, and Isabella is disgusted by the dog poop in the back yard. Halima finds pictures of Daniel on the piano and is excited because she thinks is family is “acting royalty.” The wives sit down and read the manuals that they left for each other and then they meet their new families. Halima thinks Atticus is sweet and she is going to have a good time with him. Isabella sits down and meets Jermaine and thinks he is “kind of weird.”

Per the manual Halima left for Isabella, she has to chauffeur Jermaine to a restaurant for dinner. En route she learns that Jermaine has a pet peeve. She stops to get gas and Jermaine won’t let her pump gas without touching the pump, he makes her wrap the pump in paper-towels.

At Daniel’s house he cooks breaded, fried fish and makes a mess of the kitchen. Halima enjoys eating something fried for a change, in comparison to her healthy eating with Jermaine. When she is done eating she is shocked to learn that it is her responsibility to clean the kitchen. Halima and Jermaine have house keepers and she has not cleaned in over 9 years. The next day Halima wakes up and gets Atticus dressed and takes him to school.

At Jermaine’s house Isabella wakes up to Jermaine vacuuming his entire house, which is strange since he has hired help. Jermaine informs her that it is her responsibility to call someone and have them clean up their dog’s poop outside and while he “takes the Ferarri for a spin” it is Isabella’s job to set up his schedule and itinerary for the day.

It is time for the wives to implement their own rules. Isabella informs Jermaine that it is his responsibility to make his own schedule for the day and then informs him that he is a “Hollywood Hoarder.” He has a room for his luggage, a room for his shoes, and two rooms full of clothes.

Halima informs Daniel that he needs to start doing his share of the work around the house. She doesn’t think he appreciates everything Isabella does to keep their household copasetic. She also takes Daniel to get a hair-cut and makes him dress nicer, and forces him and Atticus to do Yoga with her in the morning.

At Jermaine’s house Isabella has a storage company bring a truck over to pack up some of Jermaine’s rooms full of clothes. Jermaine refuses to let this in the gate, and locks himself in his room and refuses to film anymore for Celebrity Wife Swap.

It’s time for the round-table, Jermaine, Isabella, Halima, and Daniel meet together to discuss their experiences. Daniel praises how wonderful Halima is and how lucky Jermaine is to have her. Then, Isabelle mentions the hoarding issue at Jermaine and Halima’s house. Halima is thrown off, she has seen several houses with rooms just for their clothes and she doesn’t understand what the issue is. Daniel mentions that he thinks Halima actually enjoyed wearing jeans and tees and she admits that Jermaine doesn’t like it when she dresses down and he wants her to look like she stepped out of a magazine every day. Jermaine admits that he did like one of Isabella’s rules and that was cooking his own food-he has cooked once in the past nine years.

Jermaine Jackson says that he will never do Celebrity Wife Swap again …”not in a billion years.” Overall the Jackson family did have some impact on Isabelle and Daniel, now they go out to dinner once and awhile so that they can relax and don’t have to worry about cooking or cleaning up.