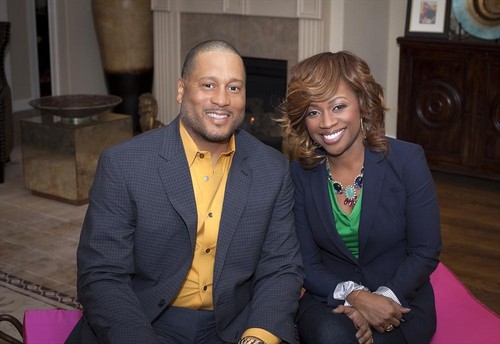 On last week’s episode former professional boxer Laila Ali and Grammy Award nominated singer Angie Stone swapped lives. Laila Ali is the daughter of boxing icon Muhammad Ali and lives in Los Angeles, CA with her husband who is former NFL Wide Receiver Curtis Conway; they have two children, Curtis Jr. (5) and Sydney (2 ½) and Laila’s stepson Kelton (18).  Angie Stone lives in Atlanta, GA with her fiance Ashanti; they have two children, their son Khalid (17) and Angie’s son Michael (16).  When it’s time for the swap, Laila is determined to get the family living a healthy lifestyle while Angie is determined to drop the family daily routine.  Did you watch last week’s episode?  If you missed it we have a full and detailed recap, right here for you.

On tonight’s episode, Supermodel and actress Angie Everhart lives in Los Angeles, CA with her boyfriend of two years, Carl, Angie’s son Kayden (4) and Carl’s daughter Joann (7). Carl runs a healthy meal delivery service that provides low-calorie, pre-packaged meals to its clients, as well as providing all of the meals to this family. Food Network Stars and best-selling authors Pat and Gina Neely live in Memphis, TN. They have been married almost 20 years and star in “Down Home with the Neelys.” Pat & Gina’s daughter, Shelby (19), is away at college and Gina’s daughter Spenser (25) is living back at home, saving money for an apartment of her own.

We will be covering tonight’s Celebrity Wife Swap, Angie Everhart and Pat & Gina Neely episode with all the details. You don’t want to miss this episode; you never know what craziness is going to break out! Don’t forget to come back to this spot at 8PM for our coverage of the episode.

Angie Everhart starts this episode of CWS by providing a background of her experience with modeling, the runway, and magazine covers. She discusses being diagnosed with thyroid cancer. She introduces her boyfriend Carl, who owns and operates a healthy food delivery company. In fact, they met when Angie used his company for food delivery. Angie is mom to Kayden, while Carl is father to Joann. She discusses how they are adrenaline junkies and enjoy the fact that they don’t spend family time cooking. They want to have more time to do the things they love and use Carl’s prepackaged healthy foods for all their meals.

Gina and her hubby love hearty dishes and spend lots of time cooking. They have a show and multiple cookbooks all centered around cooking together. They are coming up on their 20 year anniversary. They discuss their home life and routine. Shelby and Spencer are the children. Gina is the social butterfly and she wishes hubby Pat was more like her.

The wives set out to meet their new family. Once they arrive, they look around their new home until they determine whose home they are at. They each begin reading the journals from one another. They learn more about one another and their family lives. Gina notes in her journal that she wants Pat to loosen up and Angie is already plotting.

Pat arrives home and meets Angie. He is excited to have a supermodel in his home. Carl welcomes Gina and immediately recognizes her as the “spice fairy.”

Pat shares with Angie that they are having fried catfish for a party of all of Gina’s friends who are coming over. Angie immediately gets nervous as she doesn’t eat fried foods, but is already heating up the fryer. Carl, meanwhile, hands Gina his prepackaged food when she is anxious to get started on making dinner and her jaw drops! Gina shares that Pat would “kill her” if she presented prepackaged food as dinner. She says there is no love in it. Angie is a little irritated that she had to pick out Pat’s clothes for the party because he cannot seem to do it himself. As the guests indulge on all the fried foods, Angie sits by and watches them all eat while she refrains. Spencer comes home shortly after. Spencer says a brief hello and head off to bed.

The next day, Gina feels awkward about how separated the family is. Joann and Carl are out the door before Gina even gets up. Meanwhile, Angie meets with Gina’s friends to think of some ideas for adding the spontaneity to his life. Later, she meets up with Spencer and she shares that Angie was right about her prediction that she does not spend much time with her family.

Carl keeps his normal date night with Angie, but this time takes Gina. He wants to take her to an indoor skydiving facility as Angie’s mom comes to watch the kids. She is pretty excited and ends up having a great time. Meanwhile, Angie is annoyed that every day is spent in the kitchen. Pat is having an attitude because he is really nervous since he has someone coming over to sample some food and it is a high-stakes dinner for him. Angie is not enjoying the demands in the kitchen and when she tells him she doesn’t know where some things are, he grows upset. She walks out of the kitchen when she feels he is being too mean to her. She ends up crying in the other room and she shares her feelings with Pat. He apologizes and tells her it was not personal. Luckily they pull it off and their oxtail soup is a hit and they will have an article and photos in a magazine. Angie gives Pat some tips on his frozen camera look.

Gina questions Carl about the non-blended, blended family they have. Carl shares that things work well the way they are, but Gina feels like they need to be more unified.

Now for the swap to really begin! Angie and Gina give their rules to the families. Gina’s first rule is no more prepackaged foods. Pat is going to start dressing himself and the family must start eating healthier. Gina wants to start and end their day as family. There is a little resistance. Her BBQ idea went off well with Joann because it means having friends over on a school night.

Gina has everyone working on something for the BBQ. Carl thinks spending three hours in the kitchen is way too excessive. Out to dinner with Pat’s gold buddies and their wives, Pat is forced to eat healthy while everyone else is ordering what they want.

Carl stresses in the morning because breakfast is slowing down their routine. Pay is nervous about his upcoming photo shoot because it doesn’t include Gina. After the shoot, Pat is impressed with how well his pics came out and he is grateful to Angie. Gina came up with a fun way to make cooking fun for Carl and the kids. The kids loved cooking together and Carl admits this might be something they do again. Angie gets Pat to do something he’d have never done on his own…he took a helicopter ride and actually feels invigorated afterwards and is appreciative of her idea.

Both couples make their way back to their partners and are ready to meet and share their stories.

Gina shares her thoughts on Angie’s provocative pictures and the fact that there is no cooking. She shares that there is not enough unity. When Angie questions her own family’s “unity” because of Spencer’s separation from her parents, Gina responds that she does see Spencer and that Angie was only there one week. Pat tries to intervene. Pat talks about the food critic coming and the photo shoot. Gina was very surprised. Carl explains how he took Gina to the skydiving place. Angie tells Gina that she got Pat to ride in a helicopter to conquer a fear of his. Both husbands say they took something out of the experience and the spouses are happy to have their true spouse back and are more appreciative than ever before. They both go back home and share more about the things they’ll incorporate a little more based on what they’ve learned, but for the most part, both families are pretty happy with the way they’ve been doing things all along. Angie and Carl are now happily engaged, and have begun starting their morning off together as a family. Pat and Gina’s cookbook has been released and is flying off the shelves. The couple has started doing date nights as well.

See you here next week for another fun episode of Celebrity Wife Swap.