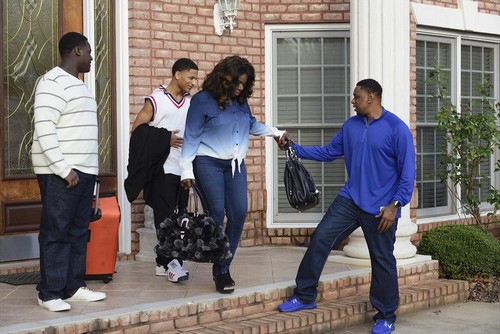 On last week’s episode of ABC Celebrity Wife Swap when it was time for the swap, Tichina Arnold was not at all prepared for what was in store in Newhall. Born and raised in NYC, country living doesn’t exactly agree with her– including having to care for all of the family animals, especially when one of Dalin’s lizards decided to get up close and personal.  Missing her wine and relaxing evenings, Tichina wass now cooking, cleaning and running a household of six. Back in New York City, Kelly Packard found the city cramped and exhausting, especially keeping up with Alijah’s busy schedule of auditions, dance classes and everything in between.  Did you watch last week’s episode?  If you missed it we have a full and detailed recap, right here for you.

On tonight’s episode, former professional boxer Laila Ali and Grammy Award nominated singer Angie Stone swap lives. Laila Ali is the daughter of boxing icon Muhammad Ali and lives in Los Angeles, CA with her husband who is former NFL Wide Receiver Curtis Conway; they have two children, Curtis Jr. (5) and Sydney (2 ½) and Laila’s stepson Kelton (18).  Angie Stone lives in Atlanta, GA with her fiance Ashanti; they have two children, their son Khalid (17) and Angie’s son Michael (16).  When it’s time for the swap, Laila is determined to get the family living a healthy lifestyle while Angie is determined to drop the family daily routine.

We will be covering tonight’s Celebrity Wife Swap, Laila Ali and Angie Stone episode with all the details. You don’t want to miss this episode; you never know what craziness is going to break out! Don’t forget to come back to this spot at 8PM for our coverage of the episode.

On tonight’s episode of Celebrity Wife Swap Laila Ali is trading families with R&B diva Angie Stone for a week. Laila lives with her husband NFL player Curtis Conway and her two young children and 18 year old step-son. Angie lives with her boyfriend/manager Tay, and their 16 year old and 17 year old sons.

It’s the morning of the swap, Angie and Laila pack their bags and say goodbye to their families. Laila makes her way to Atlanta, and Angie arrives in LA.

Angie is surprised by how spotless Laila’s house is, she assumed they have no children. She is shocked to see that they have a bowl full of organic fruit on the counter. Laila is not impressed with how messy Angie’s house is, and all of the unhealthy food in the refrigerator.

Tay arrives with the boys and meets Laila. And, Curtis brings home their three year old and two year old to meet Angie. The babies want nothing to do with Angie. Angie is shocked when she learns that Laila doesn’t have a housecleaner, and she does all the cleaning herself.

Laila begins preparing dinner, ox-tails and candied yams. She is annoyed with Angie’s open-door policy, when she learned that there will be a herd of guests stopping by to eat dinner, like they do every night. Tay has no idea how many people are coming, he says they just come and go he doesn’t keep track.

It’s Angie’s first morning in Laila’s house. She tries to get the kids ready for school, but they want nothing to with her. She finally gets them out of the house half an hour late. Then Curtis takes Angie through his morning work-out routine. Angie is not a fan, exercising with a NFL player isn’t all it’s cracked up to be. Curtis sits down with her and lectures her about getting in to shapes, she has diabetes and she needs to start taking care of herself.

Laila wakes up and begrudgingly cooks breakfast for the boys and serves Tay in bed like Angie instructed her. She discovers that Khalid didn’t do the dishes before he went to bed, and Tay makes him do 100 push-ups. Later that night Laila is annoyed because the boys sneak girls in to the basement through their side door, which is apparently the norm. Tay informs her she isn’t allowed to go down stairs and check on them because he doesn’t like Angie bothering their company.

Angie cooks a healthy dinner just like Layla instructed and has it on the table by 6:00 PM. After wards she puts the babies to bed and gets to sit down on the couch and relax with Curtis for a moment.

It’s time for the rule change. Laila wants Angie’s family to start eating healthier, Tate can’t have breakfast in bed anymore, the boys have to do their chores, and they have to tell her before they have people over, no more open-door policy.

At Laila’s house, Angie wants them to eat Southern cooking, have an open-door policy, and be more spontaneous and have more fun. She cooks them ribs for dinners and let the kids have a play date and build a fort in the middle of the living-room.

Khalid and Michael are annoyed when their friends stop by and have to come through the front door. Laila makes the girls sit down in the living-room and get to know her before they are allowed to go down to the basement.

Angie wants Curtis to relax more and have more fun. So, she takes his to get a pedicure while the kids are at school. Then the whole family heads out to go bowling, and she invites Laila’s sisters to hang out with them as well.

Laila sits down with Khalid and Michael and educated them on how to eat healthier, and how important it is for them to get their Mom to start living a healthier lifestyle.

The couples head to the Round Table to discuss the swap and what they have learned from each other’s families. Angie reveals to Laila that she let the kids had a playdate and went bowling. She thinks that Laila has her two year old and five year old living in a boot-camp. Tay thinks that Angie could be a little more organized and punctual like Laila was. Laila and Angie totally agree with the rule that the boys can’t be sneaking girls in to the basement. Tay, Laila, and Curtis all stress to Angie how important it is that she start eating healthier. Curtis thanks Angie for helping him open his mind and seeing that they can have more fun during the week. Angie breaks down in tears and thanks Curtis and Laila for helping her open her eyes about her diabetes.